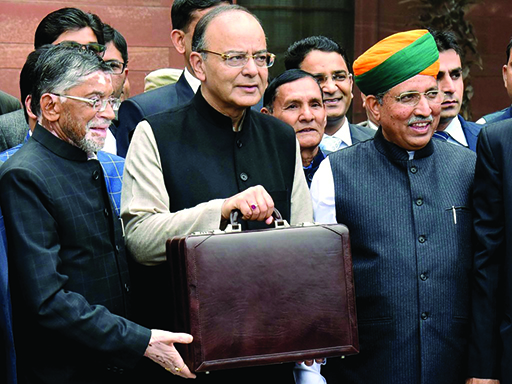 The Union Minister for Finance and Corporate Affairs, Shri Arun Jaitley presented the General Budget 2017-18 in Parliament on 1st February, 2017. This is the first of its kind which included the Railway Budget, does not have Plan and Non-plan classifications and has been advanced by a month to the beginning of February. The budget reflects the approach of development of every section of society and every sector of economy. First time in the history of Indian economy, in the budget special attention has been given to rural sector, agriculture, farmers, poor and underprivileged section of society. By reducing existing rate of tax from 10% to 5% on income between 2.5 lakhs to 5 lakhs gives relief to middle class and lower middle class. In his Budget speech Shri Jaitley said that the agenda is “Transform, Energise and Clean India” (TEC)- to transform the quality of governance for better quality of life. The aim is to energise various sections of society, especially the youth and the vulnerable and to clean the country from the evils of corruption, black money and non-transparent political funding. He said, the government will spend more in rural areas, on infrastructure and poverty alleviation while maintaining fiscal prudence. Economic reforms will be continued to promote higher investments and accelerate growth for the benefit of the poor and the underprivileged. Total expenditure in Budget for 2017-18 has been placed at Rs.21.47 lakh crores. Here we are publishing the highlights of Union Budget for our reader’s.

It will have a great impact on the economy and lives of people .

Demonetisation is a bold and decisive measure that will lead to higher GDP growth.

A sum of Rs. 10 lakh crore is allocated as credit to farmers, with 60 days interest waiver.

Government will set up mini labs in Krishi Vigyan Kendras for soil testing.

A dedicated micro irrigation fund will be set up for NABARD with Rs 5,000 crore initial corpus.

A model law on contract farming will be prepared and shared with the States.

The government targets to bring 1 crore households out of poverty by 2019.

During 2017-18, five lakh farm ponds will be be taken up under the MGNREGA.

Over Rs 3 lakh crore will be spent for rural India. MGNREGA to double farmers’ income.

Will take steps to ensure participation of women in MGNREGA up to 55%.

Space technology will be used in a big way to ensure MGNREGA works.

The government proposes to complete 1 crore houses for those without homes.

The country well on way to achieve 100% rural electrification by March 2018.

Focus will be on 3,479 educationally-backward blocks.

Colleges will be identified based on accreditation.

100 India International centres across the country.

Courses on foreign languages will be introduced.

Will take steps to create 5000 PG seats per annum.

For the poor and under privilege

Under a nationwide scheme for pregnant women, Rs. 6000 will be transferred to each person.

Affordable housing will be given infrastructure status.

Elimination of tuberculosis by 2025 targeted.

Two AIIMS will be set up in Jharkhand and Gujarat.

Will undertake structural transformation of the regulator framework for medical education.

Aadhaar-based smartcards will be issued to senior citizens to monitor health.

No service charge on tickets booked through IRCTC.

Raksha coach with a corpus of Rs. 1 lakh crore for five years (for passenger safety).

Unmanned level crossings will be eliminated by 2020.

SMS-based ‘’clean my coach service’’ is put in place.

Coach mitra facility will be introduced to register all coach related complaints.

By 2019 all trains will have bio-toilets.

500 stations will be made differently-abled friendly.

Railways to partner with logistics players for front-end and back-end solutions for select commodities.

High speed Internet to be allocated to 1,50,000 gram panchayats.

New Metro rail policy will be announced with new modes of financing.

A strategic policy for crude reserves will be set up.

FDI policy reforms – more than 90% of FDI inflows are

Foreign Investment Promotion Board will be abolished.

Computer emergency response team for financial sector will be formed.

Digital India – BHIM app will unleash mobile phone revolution. The government will introduce two schemes to promote BHIM App – referral bonus for the users and cash back for the traders.

DBT to LPG consumers , Chandigarh is kerosene-free, 84 government schemes are on the DBT platform.

Easy online booking system for Army and other defence personnel.

For big-time offences – including economic offenders fleeing India, the government will introduce legislative change or introduce law to confiscate the assets of these people within the country.

Plan, non-plan expenditure to be abolished; focus will be on capital expenditure, which will be 25.4 %.

Rs. 3,000 crore under the Department of Economic Affairs for implementing the Budget announcements.

Expenditure for science and technology is Rs. 37,435 crore.

Recommended 3% fiscal deficit for three years with a deviation of 0.5% of the GDP.

The maximum amount of cash donation for a political party will be Rs. 2,000 from any one source.

Between November 8 to December 30, deposits ranging from Rs. 2 lakh and Rs. 80 lakh were made in 1.09 crore accounts.

Proposal to have a carry-forward of MAT for 15 years.

Capital gains tax to be exempted for persons holding land from which land was pooled for creation of the state capital of Andhra Pradesh.

Proposal to reduce tax for small companies with a turnover of up to Rs 50 crore to 25%.

The government proposes to reduce basic customs duty for LNG to 2.5% from 5%.

The Income Tax Act to be amended to ensure that no transaction above Rs 3 lakh is permitted in cash.

People filing I-T returns for the first time will not come under any government scrutiny.