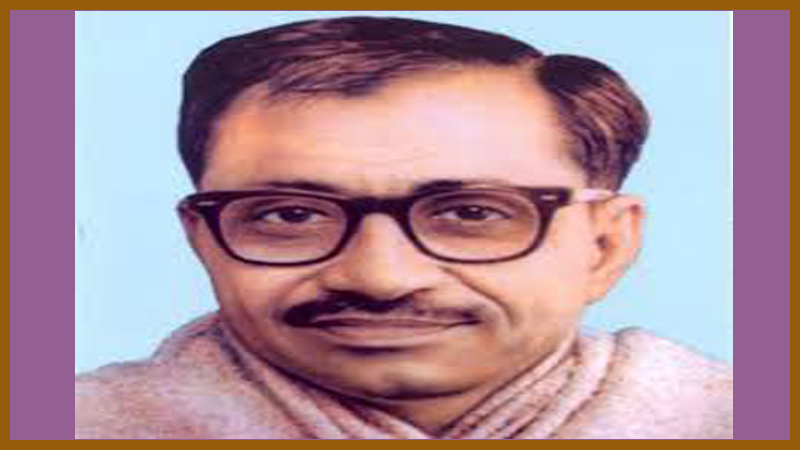 THE name Bharat denotes a nation, while the names of such provinces as Uttar Pradesh and Bengal do not denote it. Hence we must be quite clear in our minds that although a definite territory is a must and the first essential of a nation, a territory by itself does not become a nation. The existence of a nation depends upon an element which though invisible is felt with the greatest intensity. A nation has a personality just as an Individual has a personality. It is this national personality that keeps a nation alive. When it grows weak, the nation becomes weak, and when it is forgotten or destroyed the entire nation heads for ruination. This is why many nations of the past have now become mere memo- ries. Their territories are there and their people are still alive and yet ancient Persia, Greece, Egypt-all have faded. In other words they lost their basic national personality. It is in this personality that the nation resides.

THE nation does not come into being for the fulfilment of any selfish ends. The limbs of the human body have their natural functions and do not have to be tempted or encouraged to perform them. Similarly the units of a nation function as parts of one single whole and maintain its entity. Dissipation of the national feeling leads to a weakening of these limbs of the nation, and if they become completely inactive the result can be the end of the nation. But if the national feeling is aroused in these units they again start performing their natural functions. Hence we would have to accept as the basis of the nation a practical and natural organisation that is stable, strong and self-reliant. If the organisation of the State is strong enough its limbs would be equally strong.

NATION HAS A SOUL

‘CHITI’ is the touchstone, on which each action, each attitude is tested, and determined to be acceptable or otherwise. ‘Chiti’ is the soul of the nation. On the strength of this ‘Chiti’, a nation arises, strong and virile. It is this ‘Chiti’ that is demonstrated in the actions of every great man of a nation.

An individual is also an instrument in bringing forth the soul of the nation, “Chiti’’. Thus apart from his own self, an individual also represents his nation. Not only that, he also mens the various institutions that are created for the fulfilment of the national goal. Therefore he represents these too. The groups larger than nation, such as “mankind’’ are also represented by him. In, short, an individual has a multitude of aspects, but they are not conflicting; there is co-operation, unity and harmony in them. A system based on the recognition of this mutually complementary nature of the different ideals of mankind, their essential harmony, a system which devises laws, which removes the disharmony and enhances their mutual usefulness and co-operation alone can bring peace and happiness to mankind; can ensure steady development.

THE state is brought into existence to protect the nation; produce and maintain conditions in which the ideals of the nation can be translated into reality. The ideals of the nation constitute “Chiti’’ which is analogous to the soul of an individual. It requires some effort to comprehend Chiti. The laws that help manifest and maintain Chiti of a nation are termed Dharma of that nation. Hence it is this “Dharma’’ that is supreme.Dharma is the repository of the nation’s soul. If Dharma is destroyed, the nation perishes. Anyone who abandons Dharma, betrays the nation.

‘CHITI’ IS CENTRAL TO NATION

CHITI is fundamental and is central to the nation from its very beginning. Chiti determines the direction in which the nation is to advance culturally. Whatever is in accordance with Chiti is included in culture.

WE have to undertake the task of. away. awakening our nation’s ‘Virat’. Let us go forward in this task with a sense of pride of our heritage, with a realistic assessment of the present and a great ambition for the future. We wish to make this country neither a shadow of some distant past nor an imitation of Russia or America.

IT is essential that we think about our national identity. Without this identity there is no meaning of independence, nor can independence become the instrument of progress and happiness. As long as we are unaware of our national Identity, we cannot recognise or develop all our potentialities. Under alien rule this identity is suppressed. That is why nations wish to remain independent so that they can progress according to their natural bent and can experience happiness in their endeavour. Nature is powerful. An attempt to go against nature or to disregard her leads to troubles. The natural instincts cannot be disregarded but it is possible to elevate this nature to the level of culture. Psychology tells us how by suppression of various natural instincts different mental disorders ensue. Such a person remains restless and dejected. His abilities slowly deteriorate, and become perverted. The Nation too, like the individual, falls a prey to numerous ills when its natural instincts are disregarded. The basic cause of the problems facing Bharat is the neglect of its national identity.

IF we have to take the nation to the pinnacle of glory we have to fufil two conditions. The first is that this glory must be the result of our own national endeavour. For this the entire nation’s capacity to work needs to be organised. If we full this condition the prosperity we achieve for Bharat would be considered genuine. The second point is that while achieving this prosperity on the basis of organised capacity, Dharma has also to be protected. Organised force by itself is not enough. Even thieves may have a strong organization, but it will neither be permanent nor beneficial, hence it is necessary that our organised capacity should protect Dharma even while conquering glory.

IN European countries nationalism led to ruination. But to call Indian nationalism destructive because of this reason is like being once bitten twice shy. It is wrong to presume that our nationalism would be as calamitous as that of these nations. This is not a mere claim, it is the truth, and this truth is supported by thousands of years of history of Indian nationalism. The history of these countries of the world for about a thousand years is full of scenes of destruction, while in the long history of India there is not a single page describing grief caused to man. The entire history of India is full of goodwill for the whole world. The remains of Indian history found in different parts of the world declare to this day the truth that India has striven only for the good of the entire creation. Hence the truth is that if the world is to be saved from the terrible effects of Western nationalism that have resulted from mutual conflict, hatred and competition, we shall have to organist and strengthen Indian nationalism. This way lies the good of the world.