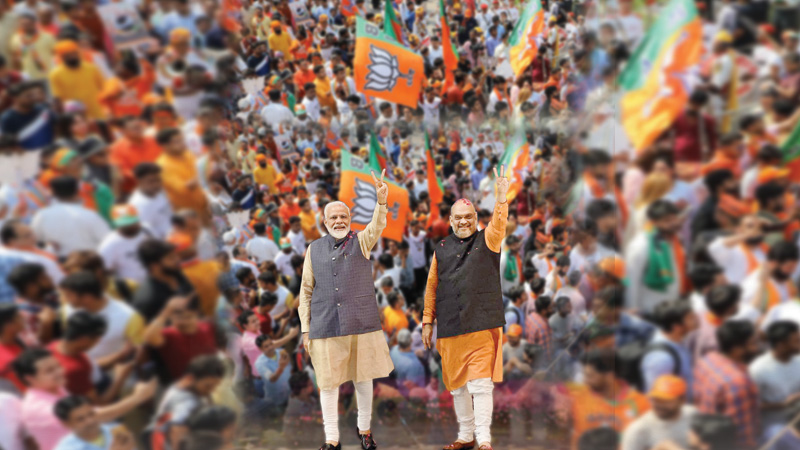 The Bharatiya Janata Party on 23 May, 2019 stunned the Opposition and the political pandits with a historic landslide victory in Lok Sabha elections 2019. The BJP had secured victory on 303 seats and the National Democratic Alliance (NDA), which includes parties like Janata Dal (United), Shiv Sena, SAD and AIADMK bagged 353 seats. On the other hand, Opposition parties are on verge of an existential crisis, especially the Congress. The grand old party scored only 52 seats which is less than the required numbers to get even the status of the main opposition party in the Lok Sabha.

Subsequent to a long and arduous election, with months of campaigning and voting spread over seven phases; India’s 879 million voters have finally spoken almost in one voice and handed another historic mandate and resounding victory to Prime Minister Shri Narendra Modi led Bharatiya Janata Party.

BJP’s 2014 victory was already record-setting; the first time a single party had attained a parliamentary majority in three decades but 2019 results surpassed even that figure and set a new benchmark for itself. To win once at that scale was astounding, a black swan event. To win twice means that Indian politics, and India itself, has changed beyond recognition.

The BJP singlehandedly won 303 seats, and it got 353 seats along with its allies. The last time a party crossed the 300-seat mark was in 1984, when the Congress won more than 400 seats in the wake of Indira Gandhi’s assassination.

The Congress, expected to challenge the BJP at least in some of the Hindi heartland states after its Assembly poll successes in December, won a mere 52 seats. It had won 44 seats in 2014. No one from the Congress may get the status of the leader of the opposition party in the Lok Sabha for the second time in succession, because it does not have 10 per cent of the strength of the House.

The Congress could not win a single seat in as many as 14 states including Rajasthan, Gujarat and Haryana. In bigger states such as Madhya Pradesh, UP, Jharkhand, Karnataka and Maharashtra, the Congress won one seat each. To add insult to injury Smt. Smriti Irani defeated Congress President Rahul Gandhi in his stronghold of Amethi by over 55,000 votes.

In states like Uttar Pradesh, where some had expected the ‘Mahagatbandhan’ of the Samajwadi Party-Bahujan Samaj Party-Rashtriya Lok Dal to stop the BJP’s juggernaut, it not only won 62 seats, along with two of the ally Apna Dal, but bagged a staggering vote share of 49.6 per cent.

In effect, the BJP in UP improved significantly on its 2014 vote share of 42.3 per cent. In 2014, the BJP alliance had won 73 seats, including two of the Apna Dal. The Mahagatbandhan could win or was leading in only 15 seats, with the Bahujan Samaj Party winning 10 and Samajwadi Party five.

The BJP also made inroads into states it had termed its “final frontiers”, including West Bengal, Odisha and Telangana. In West Bengal, the BJP won in 18 seats against the Trinamool Congress’ 22, with a vote share of 40.2 per cent. In Odisha it got 8 seats and in Telangana, the BJP won four seats. Nationally, the BJP is on its way to increasing its vote share from its all-time high of 31 per cent in 2014 to nearly 37 per cent.

After the thrashing victory, at the BJP’s victory celebrations at the central office in the national capital, PM Shri Modi appealed to his workers to exhibit humility in what is the greatest electoral triumph since the independence in 1947.

In his speech at the BJP headquarters in front of supporters unfazed by the drizzle, the PM said the BJP respected India’s constitution and federalism, but was deeply committed to its ideological tenets. He likened the electoral battle to that of Mahabharata, and thanked the people for their support to him, who is a simple fakir, or ascetic.

“We have to move ahead. We have to take everyone with us, even our opponents. We have to work for the benefit of the country,” the PM said, adding he would not do anything with bad intent even though he might at times commit a mistake on the job.
Amid cries of ‘Bharat mata ki jai’, Shri Modi said the BJP’s inspiration was its commitment to nationalism, but also said the electoral triumph belonged to the poor, who have benefited from his government’s social welfare schemes.

Shri Narendra Modi also renewed his promise to provide housing to all by 2022. The PM said this was a rare election where inflation and corruption were not electoral planks. He said the electoral verdict of 2019 had dealt a blow to those who exploited caste for electoral benefits. “Now, there are only two castes — one of the poor, and the other of those who can help uplift those who are in poverty,” he said.

At the celebrations, BJP National President Shri Amit Shah introduced PM Shri Modi as one of the most powerful leaders of the world. In his speech, while Shri Shah congratulated Odisha Chief Minister Naveen Patnaik and Andhra Pradesh’s YSR Cong­ress Party on their respective wins in the Assembly polls in the two states, he said that the BJP would soon conquer West Bengal.

Heartiest congratulations to Shri Narendrabhai Modi for steering the BJP towards this unprecedented victory in the elections.

Shri Amitbhai Shah as the BJP President and all the dedicated workers of the party have put in enormous effort in making sure that the message of BJP reaches every voter of the country.

It is such a wonderful feeling that in a country as large and diverse as India, the electoral process has been so successfully completed and for that, my compliments to the electorate and all the agencies involved.

May our great nation be blessed with a bright future ahead.

The Lok Sabha Election Results 2019 threw some big surprises. Some of the biggest names in Indian politics faced defeat at the hands of electorate. Biggest shock was Congress chief Rahul Gandhi’s defeat in family bastion Amethi. Rahul Gandhi lost to Smt. Smriti Irani by a margin of over 55,000 votes. Jyotiraditya Scindia lost his royal family’s bastion Guna, Madhya Pradesh. The seat had been in his family since its formation. Congress leader Malikarjun Kharge faced first ever defeat in his political career. He has consecutively won 10 elections [9 assemblies, 1 general] since 1972. Other surprises in Congress’s dock included Ajay Maken, Sheila Dikshit, Digvijay Singh and Shatrughan Sinha and PDP president and former CM Mehbooba Mufti lost the Anantnag Lok Sabha seat to NC.

The overwhelming decisive historic win of the NDA led by Prime Minister Shri Narendra Modi will propel India’s growth pace to the next orbit and drive the transformation of the country, stated Vikram S Kirloskar, the President of Confederation of Indian Industry (CII).

“We warmly congratulate the NDA on the landslide victory under the visionary leadership of Prime Minister Narendra Modi. The sweeping referendum truly redefines the destiny of the country and makes this India’s century. The stellar and decisive leadership of Prime Minister has led to this magnificent mandate for development. The industry is tremendously excited about Modi 2.0,” said Kirloskar.
Uday Kotak, President Designate, CII said in a statement, “CII wholeheartedly welcomes the strong election mandate which clearly reflects the aspiration of the people for a quick and constructive development agenda. Under the visionary leadership of Prime Minister Narendra Modi, India stands at a massive turning point in its historical development journey in his next term. CII greatly looks forward to working with the incoming government on its reinvigorated economic roadmap to make India a $5 trillion economy in the near future.”

This victory is a victory for the whole of India. This is victory of the youth, the poor and the farmers. This grand victory is peoples’ confidence in Prime Minister Modi Ji’s strong leadership and last five-year’s development under his leadership. I convey my heartfelt greetings to Shri @narendramodi Ji on behalf of crores of BJP Karyakartas.

This historic victory in the General Elections is the outcome of Modiji’s visionary leadership, Amit Shahji’s dynamism and the hard work of millions of BJP karyakartas on the ground. I thank the people of India for once again giving a decisive mandate to @BJP4India led NDA and reposing faith in Shri @narendramodi’s astute leadership and his vision of New India. Shri Modi is now all set to build a New India.

This is India’s victory. The BJP has made history under the successful leadership of the Prime Minister Shri @narendramodi JI. And the BJP president Shri @AmitShah Ji. Greetings to the people of the country and to all the Karyakartas @BJP4India. #VijayiBharat.

Congratulations to the Hon’ble Prime Minister Shri @narendramodi ji, all the NDA and BJP workers for achieving this miraculous win in the 2019 Lok Sabha elections.

Thank you very much PM @narendramodi JI for giving Bharatiya Janata Party such a grand victory. I convey my heartiest Congratulations to the countrymen.