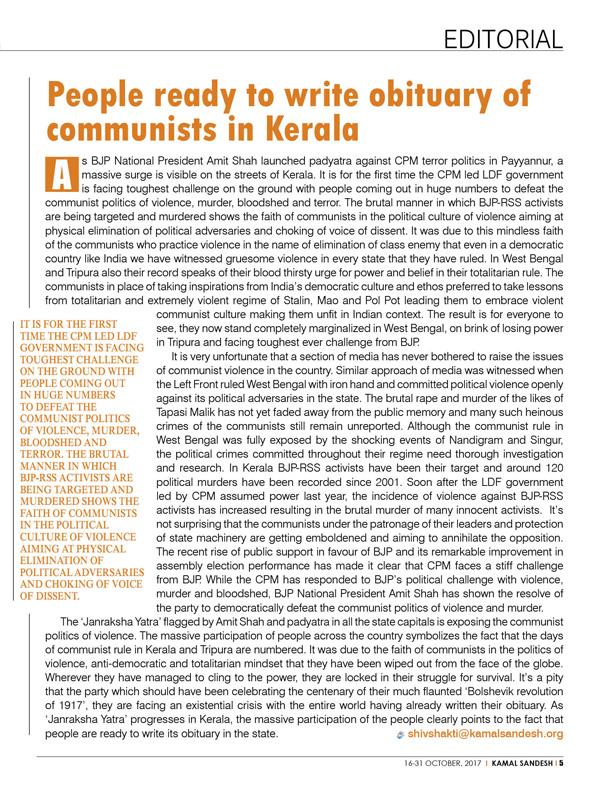 As BJP National President Amit Shah launched padyatra against CPM terror politics in Payyannur, a massive surge is visible on the streets of Kerala. It is for the first time the CPM led LDF government is facing toughest challenge on the ground with people coming out in huge numbers to defeat the communist politics of violence, murder, bloodshed and terror. The brutal manner in which BJP-RSS activists are being targeted and murdered shows the faith of communists in the political culture of violence aiming at physical elimination of political adversaries and choking of voice of dissent. It was due to this mindless faith of the communists who practice violence in the name of elimination of class enemy that even in a democratic country like India we have witnessed gruesome violence in every state that they have ruled. In West Bengal and Tripura also their record speaks of their blood thirsty urge for power and belief in their totalitarian rule. The communists in place of taking inspirations from India’s democratic culture and ethos preferred to take lessons from totalitarian and extremely violent regime of Stalin, Mao and Pol Pot leading them to embrace violent communist culture making them unfit in Indian context. The result is for everyone to see, they now stand completely marginalized in West Bengal, on brink of losing power in Tripura and facing toughest ever challenge from BJP.

It is very unfortunate that a section of media has never bothered to raise the issues of communist violence in the country. Similar approach of media was witnessed when the Left Front ruled West Bengal with iron hand and committed political violence openly against its political adversaries in the state. The brutal rape and murder of the likes of Tapasi Malik has not yet faded away from the public memory and many such heinous crimes of the communists still remain unreported. Although the communist rule in West Bengal was fully exposed by the shocking events of Nandigram and Singur, the political crimes committed throughout their regime need thorough investigation and research. In Kerala BJP-RSS activists have been their target and around 120 political murders have been recorded since 2001. Soon after the LDF government led by CPM assumed power last year, the incidence of violence against BJP-RSS activists has increased resulting in the brutal murder of many innocent activists. It’s not surprising that the communists under the patronage of their leaders and protection of state machinery are getting emboldened and aiming to annihilate the opposition. The recent rise of public support in favour of BJP and its remarkable improvement in assembly election performance has made it clear that CPM faces a stiff challenge from BJP. While the CPM has responded to BJP’s political challenge with violence, murder and bloodshed, BJP National President Amit Shah has shown the resolve of the party to democratically defeat the communist politics of violence and murder.

The ‘Janraksha Yatra’ flagged by Amit Shah and padyatra in all the state capitals is exposing the communist politics of violence. The massive participation of people across the country symbolizes the fact that the days of communist rule in Kerala and Tripura are numbered. It was due to the faith of communists in the politics of violence, anti-democratic and totalitarian mindset that they have been wiped out from the face of the globe. Wherever they have managed to cling to the power, they are locked in their struggle for survival. It’s a pity that the party which should have been celebrating the centenary of their much flaunted ‘Bolshevik revolution of 1917’, they are facing an existential crisis with the entire world having already written their obituary. As ‘Janraksha Yatra’ progresses in Kerala, the massive participation of the people clearly points to the fact that people are ready to write its obituary in the state.