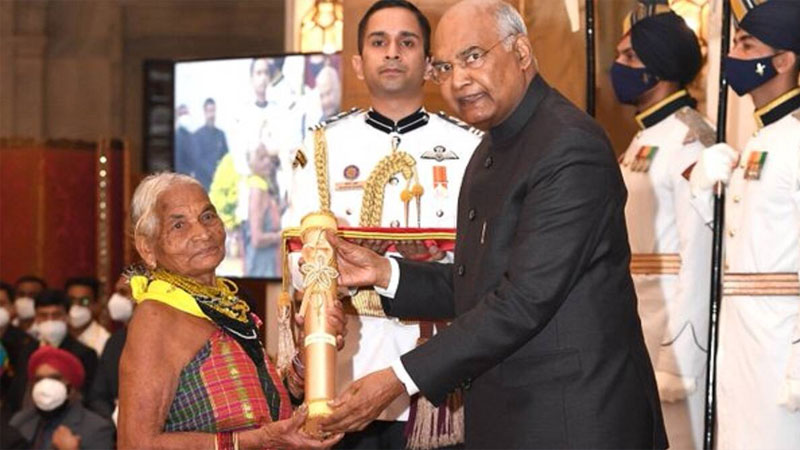 The Prime Minister Shri Narendra Modi continuously tried to upheld the lost glory of the Padma Awards since he resumes office in 2014 and the sincere efforts of PM Shri Modi showing the results when on November 8, President Shri Ram Nath Kovind conferred the prestigious civilian awards in New Delhi to the 2020 and 2021 recipients. The list of winners has made headlines, and proclaimed that it’s no longer an award reserved for the exclusive class. The award winners were among those who came from the very humble background. The inspiring stories of the winners from the barefoot environmentalist Tulasi Gowda from Karnataka to orange seller and school builder Harekala Hajabba prove that the awards truly honour significant achievements of the deserving and those who are contributing in the nation building in a significant way.

The Padma Vibhushan, Padma Bhushan, and Padma Shri are the highest civilian awards after the Bharat Ratna–recognising the contributions to various fields like social work, science, medicine, literature, sports, and art. The Padma Awards were first introduced in 1954 and being given to the personalities like former president APJ Abdul Kalam and Nobel Prize-winning economist Amartya Sen.

The central government launched a website in 2017 to make the whole process more transparent and to ensure the participation of common men in this whole process. The selection process was also changed, and the Padma Awards Committee was expanded. The visible change has been seen in the selection process and even in the same year people from very humble and rural background were conferred with this prestigious award. The list of winners included Meenakshi Amma who had been practising and teaching Kalaripayattu for about 70 years and popularly known as “granny with a sword”, and folk singer Sukri Bommagowda, for preserving cultural heritage and social activism.

From nominating deserving people to getting a chance to interact with awards winners, the government has changed the whole concept of these awards in itself. They are now being referred to as “Peoples’ Padma” because they’re beginning to represent India’s 1.4 billion population — and not just the exclusive class.

Tulsi Gowda – Hailing from Honnali village, Ankola taluk Karnataka, Tulsi Gowda is an environmentalist who has planted over 30,000 saplings. She has been involved in environmental conservation and related activities for the past six decades. She is often called the “encyclopedia of the forest” and her tribe calls her “tree goddess” for her extensive first-hand knowledge of the trees and plants of the forest.

Harekala Hajabba – The humble orange vendor from Mangaluru, Karnataka, Harekala Hajabba saved money from his earnings and built a school in his village. The school has now grown with the government’s and private entities’ support and is known as Hajabba School. He is fondly called the “Akshara Santa” or the “Letter Saint”.

Krishnammal Jagannathan – Hailing from the state of Tamil Nadu, Krishnammal Jagannathan, fondly known as Amma, is a social worker who travels to remote rural areas bringing social, economic and political transformation through propagating the philosophy of non-violence. Born in 1926, Jagannathan has worked extensively for the upliftment of the landless and the poor.

Rahibai Soma Popere – Popularly known as the ‘seed mother’, Rahibai Soma Popere is a Mahadeo Koli tribal farmer from Komblne village in the Akole tribal block in Maharashtra’s Ahmednagar district. She was unable to attend school owing to poverty, so she began working in agricultural labour and cow rearing to support her family when she was ten years old. She learned about agrobiodiversity, wild food resources, and traditional culture by practice and experience, despite not having attended school.

The Prime Minister Shri Narendra Modi hailing the awardees said, “From the environment to enterprise, agriculture to the arts, science to social service, public administration to cinema…recipients of the #PeoplesPadma come from diverse backgrounds. I would urge you all to know about each of the awardees and get inspired.”

Congratulating all the Peoples’ Padma recipients BJP National President Shri Jagat Prakash Nadda said, “The Modi government has done a great job by taking the Padma awards to their rightful deserving people. I heartily congratulate the respected Prime Minister @narendramodi ji and heartily congratulate all the respected personalities for being conferred with the Padma Award. The country is proud of you all.” #PeoplesPadma