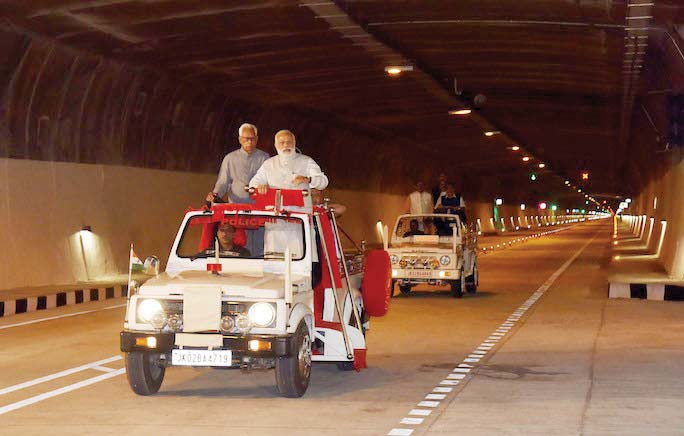 Giving message of handful of youths who indulged in stone pelting Prime Minister said to choose between terrorism and tourism. He added that violence and terrorism can never help anyone. He told the Kashmiri youth that if they ignore the invaluable tradition of sufi culture, they would lose the present and put your future into darkness. “Over last 40 years, there has been lot of bloodshed. My own valley has been blood-soaked, my Kashmir’s beloved youth, my Hindustan’s beloved youth. Nobody has benefitted from this bloodshed,” the Prime Minister emphasised. He said if the people of Kashmir had devoted the same 40 years to development of tourism, the valley would have been blessed with tourism of world class. Recalling the vision and work of former Prime Minister Shri Atal Bihari Vajpayee, the Prime Minister said that the Union Government’s sole mantra is development, and this could be achieved through people’s participation.

He thanked the Chief Minister of Jammu and Kashmir, Ms. Mehbooba Mufti, and said that work had begun on the package that the Union Government had announced for the State.

Minister of Road Transport & Highways and Shipping Nitin Gadkari said that Rs 7000 crore will be invested in highways projects in Jammu and Kashmir in the next two years. He said a ring road will be built around Jammu at a cost of Rs 2100 crores and another one around Srinagar at a cost of Rs 2200 crores.

Chenani-Nashri tunnel is Asia’s longest bi-directional highways tunnel. Built at an elevation of 1200 metres on one of the most difficult Himalayan terrains, the tunnel will cut the travel time between Jammu and Srinagar by two hours, bypassing about 41 kms of road length.

The tunnel is a part of the 286-km-long four-laning of the Jammu-Srinagar National Highway. The structure consists of a 9 km long, two-laned main tunnel with a parallel escape tunnel of same length.