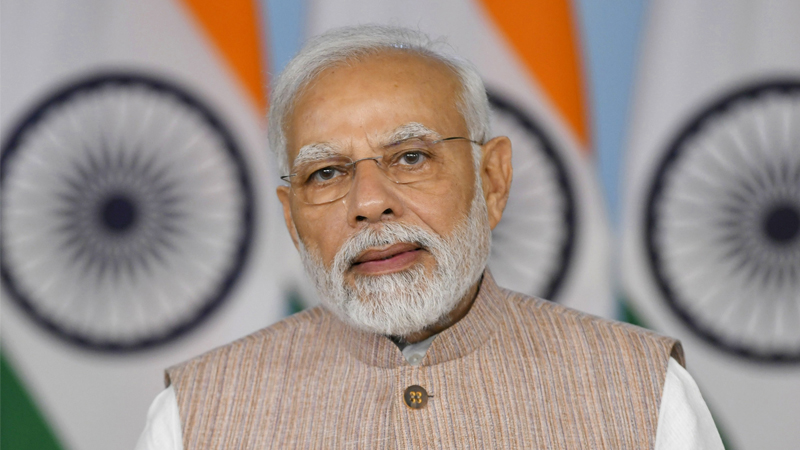 The Prime Minister, Shri Narendra Modi laid the foundation stone and dedicated to the nation multiple projects worth over Rs. 10,500 crores in Visakhapatnam, Andhra Pradesh on 12 November.

The Prime Minister began his address by recalling the time when he got the opportunity to visit Andhra Pradesh on the 125th birth anniversary of Viplav Veerudu Alluru Sitaramraju. The Prime Minister remarked that Visakhapatnam is a very special city with an extremely rich tradition of trade and business. He pointed out that Visakhapatnam being an important port in ancient India was part of the 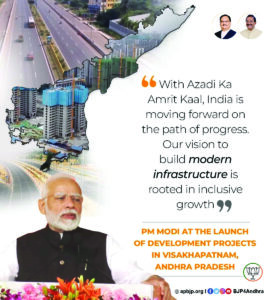 trade route to West Asia and Rome thousands of years ago, and it still remains the central point of India’s trade in today’s day and age. The Prime Minister said that the projects worth Rs 10,500 crores that are being dedicated and whose foundation stones are laid today will serve as a medium to achieve the hopes and aspirations of Visakhapatnam and Andhra Pradesh by opening up new dimensions in infrastructure, ease of living and Atmanirbhar Bharat.

Be it education or entrepreneurship, technology or medical profession, the Prime Minister said that the people of Andhra Pradesh have made a prominent name for themselves in every field. He further added that this recognition is not only a result of professional qualities but also the outgoing and jovial nature of the people of Andhra Pradesh. He expressed delight at the projects that are being dedicated and whose foundation stones are laid today and said that it will further the pace of development in the state.

“In this Amrit Kaal”, the Prime Minister said, “the country is moving forward rapidly on the path of development with the objective of a developed India.”

The Prime Minister, Shri Narendra Modi laid the foundation stone for the redevelopment of Visakhapatnam Railway Station, to be done at a cost of around Rs 450 crores. The redeveloped station would cater to 75,000 passengers per day and will improve the passenger experience by providing modern amenities.


The Prime Minister also laid the foundation stone for the modernisation and upgradation of Visakhapatnam Fishing Harbour. The total cost of the project is around Rs. 150 crores. The fishing harbour, after its upgradation and modernisation, will double the handling capacity from 150 Tons per day to about 300 tons per day.

He also laid the foundation stone of Andhra Pradesh section of the six-lane Greenfield Raipur- Visakhapatnam Economic Corridor. It will be built at a cost of more than Rs 3750 crore.

He also dedicated to the nation, Narasannapeta to Pathapatnam section of NH-326A built at a cost of more than Rs 200 crore as a part of the Srikakulam-Gajapati Corridor. The project would provide better connectivity in the region.