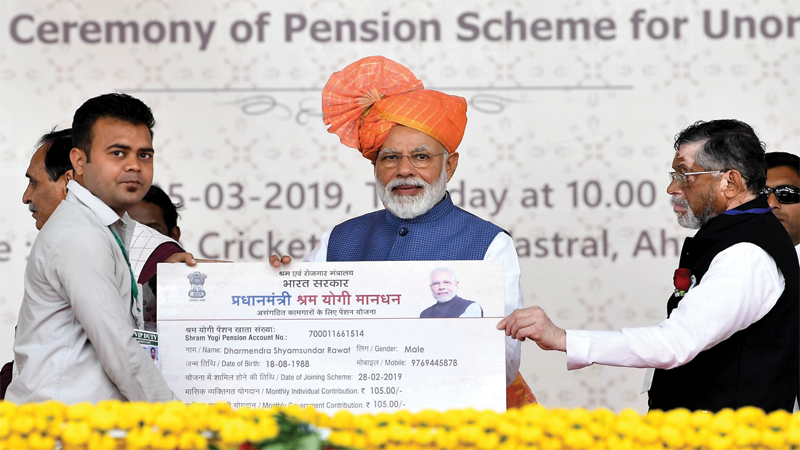 Terming it as a historic day, the Prime Minister dedicated PM-SYM Yojana to the forty two crore strong unorganized sector workers in the country. He said that the scheme will assure a monthly pension of Rs.3000 for the enrolled unorganized sector workers during their old age. It is for the first time since independence that such a scheme is envisaged for the crores of workers engaged in the informal sector, PM added.

The Prime Minister explained in detail about the benefits of PM-SYM. A contribution of equal amount as that of the beneficiary will be made by the Union Government, PM said. He appealed to the informal sector workers earning less than Rs.15000 per month to enroll as beneficiaries in the nearby Common Service Centre.

Assuring that there would not be any hassles with the enrollment process, Modi told the gathering that only a form needs to be filled with Aadhar number and bank details. The cost incurred by the Common Service Centre for enrolling a beneficiary will be borne by the Union Government. “This is the miracle of Digital India”, PM said.

The Prime Minister appealed to citizens to help and enroll in PM-SYM, those working in the unorganized sector, whether it is in one’s house or in the neighborhood. He said that such actions by the affluent class will greatly benefit the poor. He added that respecting dignity of labour will take the nation forward.

Reiterating his strong stance against corruption, PM said that his Government is committed to eliminating middlemen and corruption. He added that the Prime Minister is always on alert.

He then flagged off the Metro train and took a ride in the metro.

Addressing the gathering at the BJ Medical College Ground, the Prime Minister said that it is an historic day, as the dream of Ahmedabad Metro has come into fruition. He said that the metro will provide a convenient and environment friendly mode of transportation for the people in Ahmedabad. Before 2014, there was only 250 km operationalnetwork of metro in the country, while now there is 655 km. PM said. 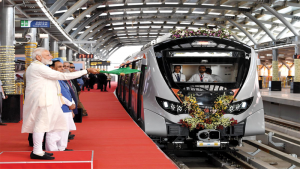 The Prime Minister said that the common mobility card unveiled, eliminates the need for having multiple cards for travelling in metro and using other means of transportation throughout the country. He said the card would ensure ‘One Nation-One Card’ for mobility. He added that the indigenously built card has removed the previous international dependence on making such cards. India is one of the few countries in the world having aOne Nation-One Card for transportation, PM added.

Prime Minister also spoke about the various initiatives taken by the State Government and Union government for the development of Gujarat, like water supply schemes, electricity for all, infrastructure development, housing for all and schemes for poor. He also explained in detail the various schemes undertaken for the welfare of Adivasi community in the State.

The transformation of the Gujarat in the past couple of decades is due to meticulous planning and hard work of the people in the State, PM said. He added that Gujarat should be taken as a case study on how development should be undertaken. He mentioned that the multitude the infrastructural development projects being implemented in Gujarat will transform the State massively.

One Nation, One Card launched in Ahmedabad for Mobility

Prime Minister Narendra Modi launched on March 4 One Nation, One Card for transport mobility at a function in Ahmedabad today. The Indigenous Automatic Fare Collection System based on One Nation One Card Model i.e. National Common Mobility Card (NCMC) is the first of its kind in India.

These are bank issued cards on Debit/Credit/Prepaid card product platform. The customer may use this single card for payments across all segments including metro, bus, suburban railways, toll, parking, smart city and retail. The stored value on card supports offline transaction across all travel needs with minimal financial risk to involved stakeholders.