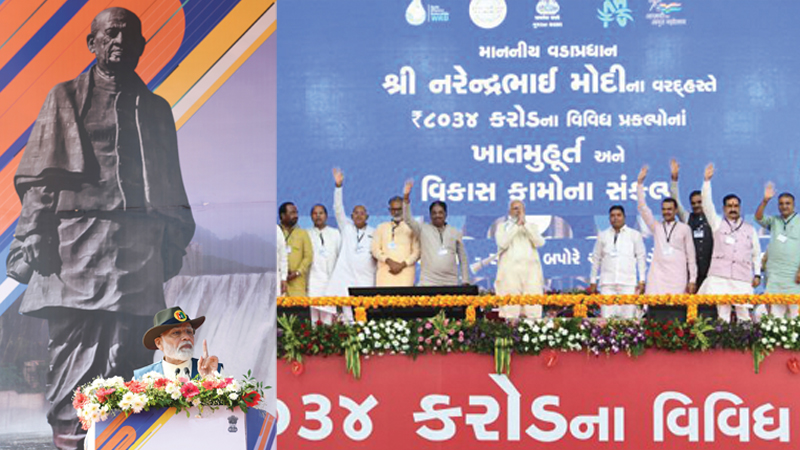 The three days visit of Prime Minister Shri Narendra Modi to Gujarat began from 30th October to 1st November, 2022. Prime Minister Shri Modi visited Kevadia, participated in the Rashtriya Ekta Diwas celebrations and paid homage to Sardar Vallabhbhai Patel at the Statue of Unity on 31st October. Shri Modi laid the foundation stone of C-295 Aircraft Manufacturing Facility at Vadodara and laid stone for several development projects in Tharad, Banaskantha. During a public programme in Tharad, Shri Modi laid the stone for the work on water supply projects worth over 8000 crore. He also dedicated to the nation, key railway projects in Ahmedabad. On 1st November, the PM dedicated the foundation stone of various development projects at Jambughoda in Panchmahal district of Gujarat.
During the visit, the Bridge mishap tragedy happened in Morbi. Shri Narendra Modi expressed his deep anguish for the victims, immediately announced Ex-Gratia of 2 lakh for the victims and 50, 000 for the injured from PM National Relief Fund. He also visited the incident site, hospital and reviewed the search and rescue operations there.

KEVADIA
PM participates in ‘Rashtriya Ekta Diwas’ celebrations
On Rashtriya Ekta Diwas, Prime Minister Shri Narendra Modi paid homage to Sardar Patel at the Statue of Unity and participated in related events in Kevadia on October 31, 2022. Shri Modi underlined the significance of Ekta Diwas in 2022 as “it is the year when we completed 75 years of our Independence and we are moving ahead with new resolutions.”

Unity essential at every stage
The Prime Minister said that unity is essential at every stage, be it family, society or nation. This feeling is manifested all over the country in the form of 75,000 Ekta Runs everywhere, he said. “Entire country is drawing inspiration from the resolute determination of Sardar Patel. Every citizen is taking a pledge for the unity of the country and to evoke ‘Panch Pran’”, he said.

“Sardar Patel’s Jayanti and Ekta Diwas are not merely dates on the calendar for us; they are grand celebrations of India’s cultural strength. For India, Unity was never a compulsion; it was always a feature of our country. Unity has been our uniqueness”, the Prime Minister emphasised.

Policies reaching every person without any discrimination
Shri Modi remarked, “On the occasion of Ekta Diwas, I would like to reiterate the responsibility handed out by Sardar Saheb.” He said that it was the responsibility of citizens to strengthen the unity of the nation and this will happen only if every citizen of the country readies themselves to carry out the duties with a sense of responsibility.
Shri Modi stated that government policies are reaching every person in the country without any discrimination. Giving examples, the Prime Minister highlighted that free vaccines are made available to the people of Siang in Arunachal Pradesh as easily as the people in Surat, Gujarat. Prime Minister noted that even though different languages are spoken in different areas, the government schemes are reaching every part of India while connecting the last person in the queue.

Visits accident site in Morbi
Prime Minister Shri Narendra Modi along with Gujarat CM Bhupendra Patel, visited the incident site in Morbi and reviewed the search and rescue operations. Before he arrived at the spot, he conducted an aerial survey of the location. After taking the review from officials and inspecting the incident site. Shri Modi visited Morbi Civil hospital were injured people were operated. He met injured victims and also asked doctors about their health conditions.

Meets victim’s family
Shri Modi also met victim’s family and consoled them. PM promised a detailed and extensive inquiry which will identify all aspects relating to this mishap.

The Prime Minister’s office tweeted; “PM @narendramodi has announced an ex-gratia of Rs. 2 lakh from PMNRF for the next of kin of each of those who lost their lives in the mishap in Morbi. The injured would be given Rs. 50,000.”
The Gujarat Government declared a state-wide mourning on November 2 after the tragic bridge collapse incident in Morbi.

Addressing the gathering, the Prime Minister said that today, we have taken a big step in the direction of making India the manufacturing hub of the world. He said India is making fighter jets, tanks, submarines, medicines, vaccines, electronic gadgets, mobile phones and cars that are popular in many countries. He remarked that India is moving forward with the mantra of ‘Make in India, Make for the Globe’ and now India is becoming a huge manufacturer of transport aircrafts in the world. The Prime Minister stated that he can foresee that India will soon be manufacturing big passenger aircrafts that will proudly bear the words ‘Made in India’.

He said that the facility, for which the foundation stone was laid today, has the power to transform the country’s defence and transport sector. He pointed out that it is for the first time that this big investment is taking place in the Indian Defence sector. The Prime Minister expressed happiness about the fact that more than 100 MSMEs are also associated with the project. He said that the promise of ‘Make in India, Make for the Globe’ will gain new push from this land as the project will be able to take orders for export to other countries in the future.

AHMEDABAD
PM Modi dedicates various railway projects in Ahmedabad
Two railway projects worth over Rs. 2900 crores at Asarva, Ahmedabad were dedicated to the nation on October 31, 2022 by Prime Minister Shri Narendra Modi. Addressing the gathering, Shri Modi said these projects will give a new direction to Gujarat’s development and connectivity. He underlined that lakhs of people of Gujarat who used to be troubled due to the lack of broad gauge line in a large area are going to get a lot of relief.

He emphasised “When the government of double engine works, its effect is not only double, but it is manifold. After decades of independence”, the Prime Minister said, “the rich-poor gap, the gulf between village and city, and unbalanced development have been a major challenge for the country. The government is working to solve this.

Tharad, Banaskantha
PRIDE OF NATION IS COMMITMENT OF DOUBLE ENGINE GOVERNMENT: PM
PM Shri Narendra Modi laid the foundation stone of projects worth over Rs. 8000 crores in Tharad, Banaskantha in Gujarat on October 31, 2022. Addressing on the occasion Shri Modi said these projects will help in irrigation facilities to more than six districts of Gujarat including Banaskantha, Patan and Mehsana.
“Since the time I have become a ‘sevak’ of the land, it was our government that identified the problems of the region and worked towards completing them with utmost dedication and sincerity.” “We focused on water conservation, built check dams and ponds”, Shri Modi said.

The Prime Minister gave examples of ‘Sujalam-Sufalam Yojna’, ‘Wasmo Yojna’ and ‘Pani Samitis’. He also underlined the crucial role played by women which resulted in the entire North Gujarat region including Kutch flourishing with drip irrigation and ‘per drop more crop’ model while giving a boost to agriculture, horticulture as well as tourism in the region.