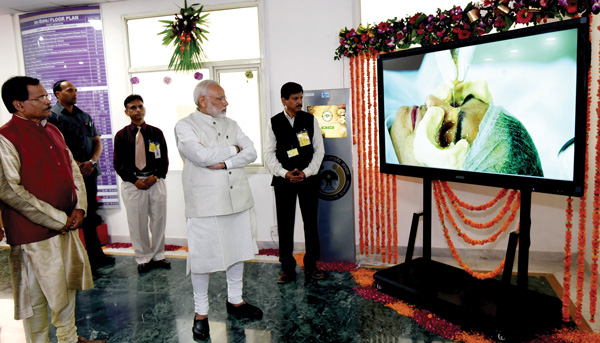 The Prime Minister Shri Narendra Modi on 17 October, 2017 dedicated the All India Institute of Ayurveda, in New Delhi to the nation. Speaking on this occasion, the Prime Minister congratulated the gathering on the celebration of Dhanvantari Jayanti as Ayurveda Divas. He complimented the Ministry of AYUSH for the establishment of the All India Institute of Ayurveda.
Shri Narendra Modi said that Ayurveda is not just a medical practice, but encompasses public health and environment health as well. That is why the Government has laid stress on integrating Ayurveda, Yoga and other AYUSH systems into the public healthcare system.

He said that the Government is working towards establishing an Ayurveda hospital in every district of the country. He said that more than 65 AYUSH hospitals have been developed in the last three years.

The All India Institute of Ayurveda, set up on a total area of 10.015 acres on a budget of Rs 157 crore, is the first medical institute under the AYUSH ministry to hold the coveted National Accreditation Board for Hospitals and Healthcare Providers (NABH) accreditation.

Set up as an apex institute under the Ministry of AYUSH, the AIIA will bring in the synergy between traditional wisdom of Ayurveda and modern diagnostic tools and technology, Minister of State for AYUSH Shri Shripad Yesso Naik said on the occassion.

“In a short time, the AIIA has gained wide national and international recognition. It has started working towards facilitating quality patient care and research, bridging gaps in scientific information about quality, safety and efficacy of Ayurveda products, and developing benchmarks of Ayurvedic education, research and healthcare,” Shri Naik said.

–We respect every healthcare system and want the growth of all.

–The government wants that the poor to get access to India’s healthcare system.

–More investment is needed in this sector for better growth, says PM Modi. He appeals to the private sector to contribute towards the development of yoga and Ayurveda by contributing parts of their CSR funds.

–PM Modi says India’s coastal areas should be explored for new discoveries in the field.

–The farming of medicinal plants will give new employment opportunities.

–PM Modi supports certificate after every level of Ayurveda education.

–The supporting chains of ayurveda must be developed, says PM  Shri  Modi.

–Ayurveda and yoga can be effective for our soldiers, says PM Modi, adding that it can boost their immunity.

–Expect an environment of wellness so that people don’t have to visit hospitals, says PM  Shri Modi.

–PM Modi hopes that the All India Institute of Ayurveda will become popular in the coming days.

–In every district of this country, there must be a good hospital having links with traditional treatment, says PM  Shri Modi.
PM Modi talks about the government’s efforts in integrating traditional medicinal practices and the modern healthcare.
Yoga has spread across the world and the AYUSH ministry has done a good job, says PM  Shri Modi.

–We forgot our legacy for a long time…but now we have started remembering it again, says PM  Shri Modi.

–A country can’t move forward if it isn’t proud of its legacy, says PM Shri Modi.