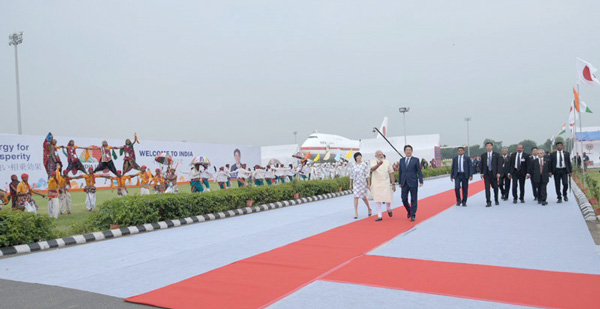 Japanese Prime Minister Shinzo Abe was on two-day-visit to India from September 13 to 15 to attend fourth India-Japan annual summit meeting with Prime Minister Narendra Modi. During the visit Prime Minister Shri Narendra Modi and Japanese Prime Minister Shinzo Abe on September 14 jointly laid the foundation stone for India’s first high speed rail project between Mumbai and Ahmedabad. Speaking on the occasion, at a large public meeting in Ahmedabad, the Prime Minister spoke of the high ambition and willpower of “New India.” He congratulated the people of India on the occasion, and said that the bullet train project will provide speed and progress, and deliver results quickly. He said the Government’s focus is on increasing productivity through high speed connectivity. The Prime Minister thanked Japan for the technical and financial help given to India, for this project. He praised Prime Minister Abe for the fact that this project is being launched within such a short time.

The Prime Minister said that this high speed railway would not only bring two cities closer, but also bring the people living hundreds of kilometers away, closer to each other. He said a new economic system is being developed along the Mumbai-Ahmedabad corridor, and the entire area would become a single economic zone. 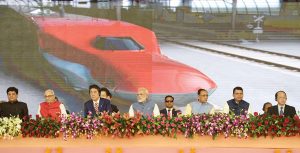 The Prime Minister said technology is useful only if it provides benefit to the common man. He said the technology transfer envisaged in this project will benefit Indian Railways, and boost the “Make in India” initiative. He said the project would be eco-friendly as well as human-friendly. He said “high-speed corridors” would be regions for rapid growth in the future.

The Prime Minister said that the Government is working to ensure that infrastructure is developed keeping in mind futuristic requirements. He expressed confidence that everyone would work together to complete this project in the shortest possible time.
Earlier, Japanese Prime Minister Shinzo Abe said that the India-Japan partnership is special, strategic and global. He said that he hopes to see the beauty of India through the windows of the Bullet Train, a few years hence. 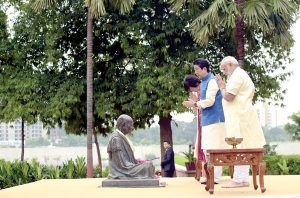 -The 508km-long Mumbai to Ahmedabad High Speed Rail (MAHSR) is scheduled to inaugurate on August 15, 2022 to mark India’s 75th year of Independence..

-The ambitious project would cost around Rs 1.10 lakh crore.The Japan International Cooperation Agency (JICA) will fund it at a low rate of interest of 0.1% per annum. This loan has to be repaid to Japan in 50 years, with 15 years grace period.
The train will have a top speeds of 320-350 km per hour and it is expected to reduce travel time between the two cities to around 2 hours from the existing 7-8 hours.

-The proposed route will only require around 825 hectares of land for the project as 92% of the route will be elevated, six per cent will go through tunnels and only the remaining two per cent will be on the ground. India’s longest tunnel — 21-km-long — will be dug between Boisar and BKC in Mumbai, 7km of which will be under the sea. The train tracks will elevated to 18 metres for most of its route to ensure the train runs over the existing railway route. The remaining, less than 40km, stretch will be under sea between Thane and Vasai, and underground in Mumbai.
-The railways would run about around 35 bullet trains when it starts operation with about 70 trips per day. The number of trains would be increased to 105 trains in 2050.