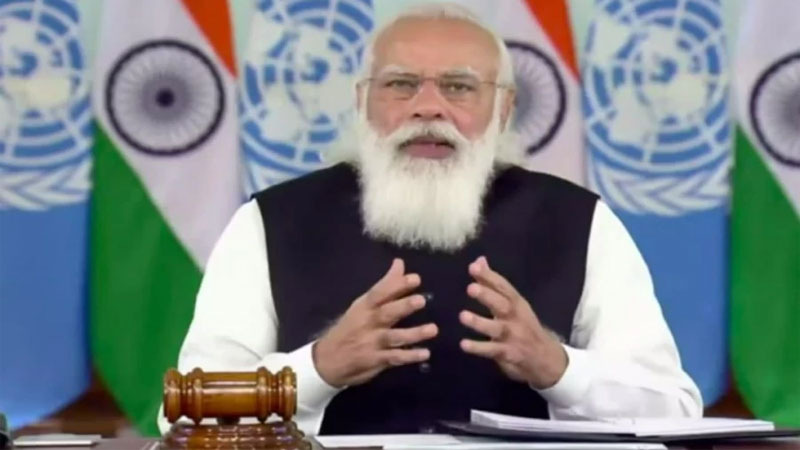 Prime Minister Shri Narendra Modi chaired the High-level Open Debate on ‘Enhancing Maritime Security – A Case for International Cooperation’ on 9th August via video conferencing. The Open Debate focused on ways to effectively counter maritime crime and insecurity and strengthened coordination in the maritime domain. Shri Narendra Modi became the first Indian Prime Minister to preside over a UN Security Council Open Debate. The meeting was attended by several Heads of State & Government of member states of the United Nations Security Council, and high level briefers from the UN System and key Regional Organizations. In his remarks, Prime Minister Shri Modi outlined a five-principle framework for the debate. The first was removing barriers to maritime trade. In this context,Shri Modi highlighted SAGAR (‘Security and Growth for all in the Region’) — a 2015 Indian framework for regional maritime security.

The original address was delivered by PM Shri Modi in Hindi. Excerpts:

Excellencies, Thank you all for joining this important discussion on Maritime Security. I appreciate the positive message by Secretary General and I would like to thank the Executive Director of U.N.O.D.C. for the briefing. The President of the Democratic Republic of the Congo delivered his message in capacity of the President of the African Union. I am especially grateful to him. I also express my heartfelt gratitude for the presence of the President of Russia, the President of Kenya, and the Prime Minister of Vietnam.

The ocean is our joint heritage.Our sea routes are the lifeline of international trade. And, the biggest thing is that these oceans are very important for the future of our planet. But today our shared maritime heritage is facing many challenges. Sea routes are being misused for piracy and terrorism. There are maritime disputes between many countries. And climate change and natural disasters are also maritime domain related issues. In this broad context, we must make a framework of mutual understanding and cooperation for the preservation and use of our common maritime heritage. No country can make such a framework alone. It can only be realized through a common effort. It is with this thought that we have brought this important issue before the Security Council. I am confident that today’s High Level discussion will guide the world on the issue of maritime security.

I would like to place before you five basic principles to structure this brainstorming.


First principle: We must remove barriers from legitimate maritime trade. The prosperity of all of us depends on the active flow of maritime trade. The hurdles could be a challenge for the entire global economy. Free maritime trade has been associated with the civilization of India since time immemorial. Thousands of years ago, Lothal port of Indus valley civilization was linked to maritime trade. It was in the independent maritime environment of ancient times that the message of peace of Lord Buddha spread to the world. In today’s context, India has defined the vision of SAGAR – (Security and Growth for All in the Region) – based on this open and inclusive ethos. Through this vision, we want to create an inclusive structure of maritime security in our region. This vision is of a Safe, a Secure and a Stable maritime domain. Free maritime trade also requires that we fully respect the rights of each other’s sailors.

Second principle: The settlement of maritime disputes must be peaceful and on the basis of international law only. This is very important for mutual trust and confidence. It is only through this that we can ensure global peace and stability.With this understanding and maturity, India has resolved its maritime boundary with its neighboring country Bangladesh.

Third principle: We must face natural disasters and maritime threats created by Non-state actors together.India has initiated several steps to enhance regional cooperation on this subject. We have been the first responder in maritime disasters related to cyclone, tsunami and pollution. The Indian Navy has been patrolling in the Indian Ocean since 2008 to prevent piracy.India’s White Shipping Information Fusion Center is increasing shared maritime domain awareness in our region. We have provided training in Hydrographic Survey Support and Maritime Security to many countries.India’s role in the Indian Ocean has been as a Net Security Provider.

Fourth principle: We have to preserve the maritime environment and maritime resources. As we know, the oceans have a direct impact on the climate. And therefore, we have to keep our maritime environment free from pollution like plastics and oil spills. And take joint steps against over-fishing and marine poaching. At the same time, we must also increase cooperation in ocean science.India has launched an ambitious “Deep Ocean Mission”. We have also taken several initiatives to encourage sustainable fishing.

Fifth Principle: We must encourage responsible maritime connectivity.It is clear that infrastructure creation is necessary to increase maritime trade. But, the physical sustainability and absorption capacity of the countries have to be kept in mind in the development of such infrastructure projects. For this we must make proper global norms and standards.

I am sure, on the basis of these five principles, a global roadmap of maritime security cooperation can be formed. The high and active participation of today’s open debate shows that the subject is important for all members of the Security Council.
With this, I once again express my gratitude to you for your presence.
Thank you!