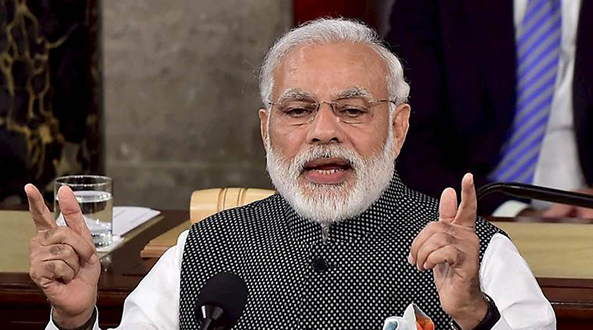 
Six day four nation tour of Prime Minister Shri Narendra started on May 29.He arrived Germany on May 29. Here, in Berlin he held wide-ranging fruitful talks with Chancellor Angela Merkel and attended the 4th India-Germany Intergovernmental Consultations. Prime Minister Shri Narendra Modi and Chancellor Merkel jointly addressed a Business Event where top CEOs from both the sides were present. In an interview with the German newspaper, ‘Handelsblatt’, he had urged Europe to play a lead role in tackling the menace of terrorism. 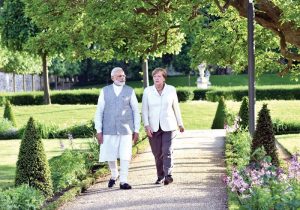 In Germany talking to a German Newspaper Shri Modi said, “Europe has been hit hard by terrorism. To our mind, terrorism is the gravest challenge facing humanity. Europe must play a lead role in developing an effective global response under the aegis of the United Nations to deal with this menace”. On Indo-German ties, he said India sees Germany as an important partner in the national flagship programmes of Make in India, Skill India, Start-up India, Clean India and Smart Cities.

“We are keen to attract German Mittelstand [small and medium enterprises] to partner with us in our Make in India programme. We are committed to provide a supportive business ecosystem to those who join us in our growth story,” he said.
“We have established dedicated platforms to support German companies and investments in India. There is strong commitment from the leadership on both sides to strengthen economic relations. I am very optimistic about this partnership,” he added.

In reference to Germany as the host of the G20 summit in Hamburg in July, PM Modi offered India’s full support for a successful outcome. “The G20 has emerged as a premier forum for coordination on international and financial matters. Our expectation is that G20 would be able to enhance global growth,” he said. 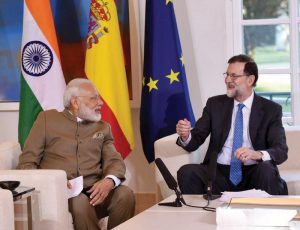 Next day on May 30 Prime Minister reached Spain. Here, he held a meeting with President Mariano Rajoy and discussed bilateral and other issues of mutual interest. As part of the programme, Prime Minister also met King Felipe VI of Spain. He joined Round-Table interaction with leading Spanish business leaders and invited them to explore opportunities in Indian market. During tour India and Spain signed seven agreements, including on cooperation in cyber security and renewable energy. Three other MoUs were signed on cooperation in organ transplantation, technical cooperation in civil aviation, and between the Foreign Service Institute of India and the Diplomatic Academy of Spain.
Two agreements were also signed on transfer of sentenced persons and waiving of visas for diplomatic passport holders. 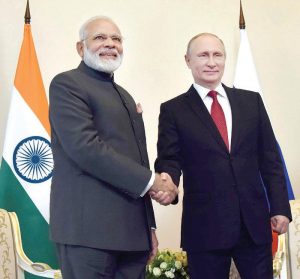 Third leg of his four-nation visit Prime Minister Narendra Modi visited Russia from June 1-2, 2017. Prime Minister Shri Modi and President Vladimir Putin held bilateral talks to further deepen cooperation in host of sectors. Key pact on Kudankulam nuclear pact was inked during the PM’s visit. The leaders held the 18th India-Russia Annual Summit in St. Petersburg. The Prime Minister also participated in the St. Petersburg International Economic Forum on June 2, 2017 as Guest of Honour. In International Economic Forum Sharing dais with Russian President Vladimir Putin and the leaders of Austria and Moldova Shri Modi described terrorism as a global menace. He urged the world community to block funding, weapons and communication modes of terrorists, in an apparent reference to Pakistan’s support for Kashmiri militants. He added “World must rise above debate of ‘good terrorism, bad terrorism’ and come together to tackle the problem which is enemy of humankind.” Some countries are giving arms to terrorists and funding them, he said. 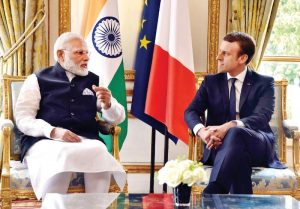 In the last leg of his four nations tour PM Shri Narendra Modi visited France on 2-3 June. In Paris he held fruitful talks with President of France, Emmanuel Macron on 3rd June and discussed issues of mutual interest with a view to further strengthen India-France strategic ties. Shri Modi and Macron discussed issues of international and mutual interests, including counter terrorism and climate change.

India would “continue working on this…above and beyond the Paris accord,” the PM said. “We have natural resources because our previous generations protected these resources. We must do the same for our future generations,” Shri Modi said.