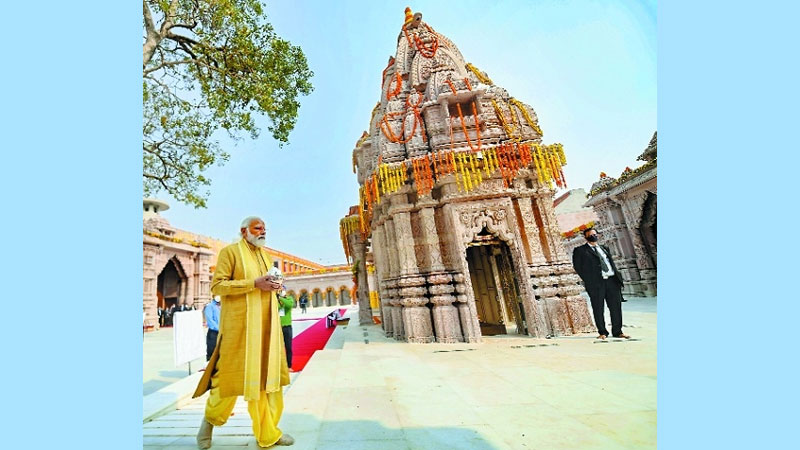 Prime Minister Shri Narendra Modi inaugurated Shri Kashi Vishwanath Dham corridor under the ‘Divya Kashi, Bhavya Kashi’ programme in Varanasi on 13 December 2021, a project which is spread over five lakh square feet and connects the temple premises to the River Ganga besides providing several facilities to devotees. After arriving in the holy city, Shri Modi paid obeisance at the Kaal Bhairav Temple and then took a dip in the Ganga from where he collected holy water for worship at the Kashi Vishwanath Temple. Before the inauguration, PM Shri Modi also attended a prayer ceremony and later showered workers involved in building the project with flower petals in a gesture to acknowledge their work. He also sat with them for a group photograph. BJP National President Shri JP Nadda, Uttar Pradesh Chief Minister Yogi Adityanath, other senior leaders and a large number of saints from across the country attended the ceremony.

VISHWANATH DHAM IS NOT JUST A GRAND BUILDING Starting his address with pranam at the feet of ‘Nagar Kotwal’ (Lord Kaal Bhairav), the Prime Minister said nothing special happens without his blessings. The PM sought the lord’s blessings for the countrymen. The PM cited Puranas which say that as soon as one enters Kashi, one becomes free from all bondage. “Blessings of Lord Vishweshwara, a supernatural energy awaken our inner soul as soon as we come here”. He added that this whole new complex of Vishwanath Dham is not just a grand building. This is a symbol of the Sanatan culture of our India. It is a symbol of our spiritual soul. This is a symbol of India’s antiquity, traditions, India’s energy and dynamism. The Prime Minister said ‘when one comes here, they will see not only faith but will also feel the glory of the past here. How antiquity and novelty come alive together. How the inspirations of the ancient are giving direction to the future, we are witnessing this very vividly in Vishwanath Dham complex’, he added.
Shri Modi noted that earlier the temple area was only 3000 square feet which has now enlarged to about 5 lakh square feet. Now 50000 – 75000 devotees can visit the temple and temple premises. That is, first the darshan and bath in Maa Ganga, and from there directly to Vishwanath Dham, he informed.

PM HAD HIS LUNCH WITH WORKERS OF VISHWANATH DHAM 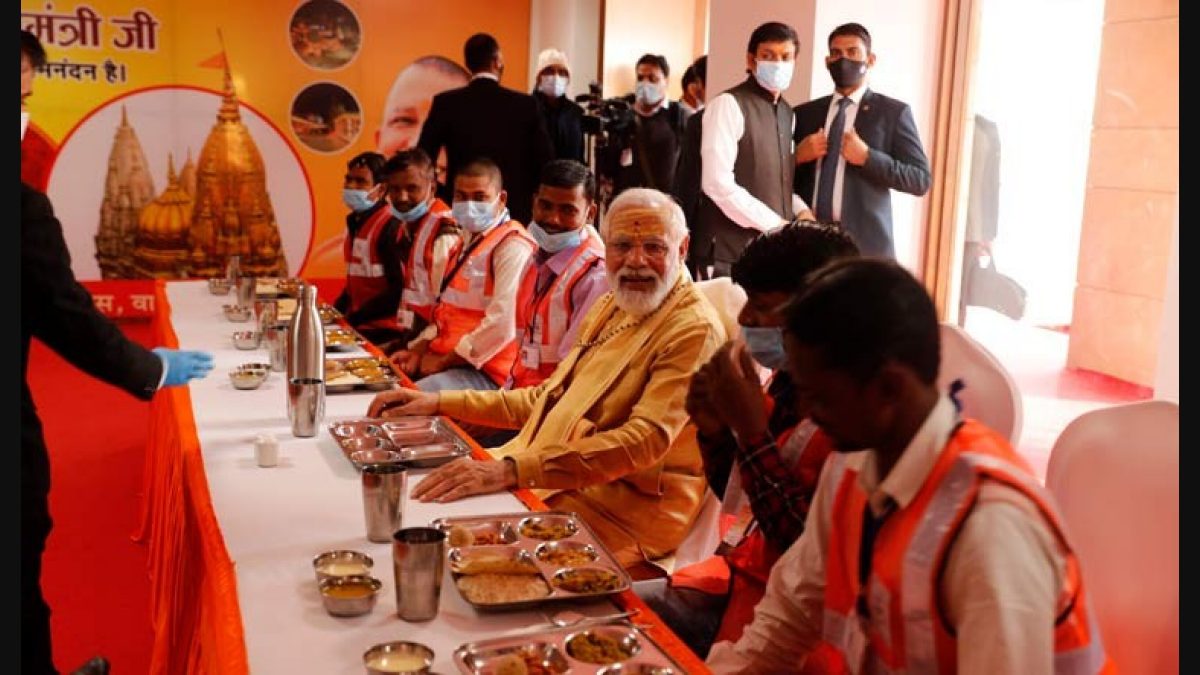 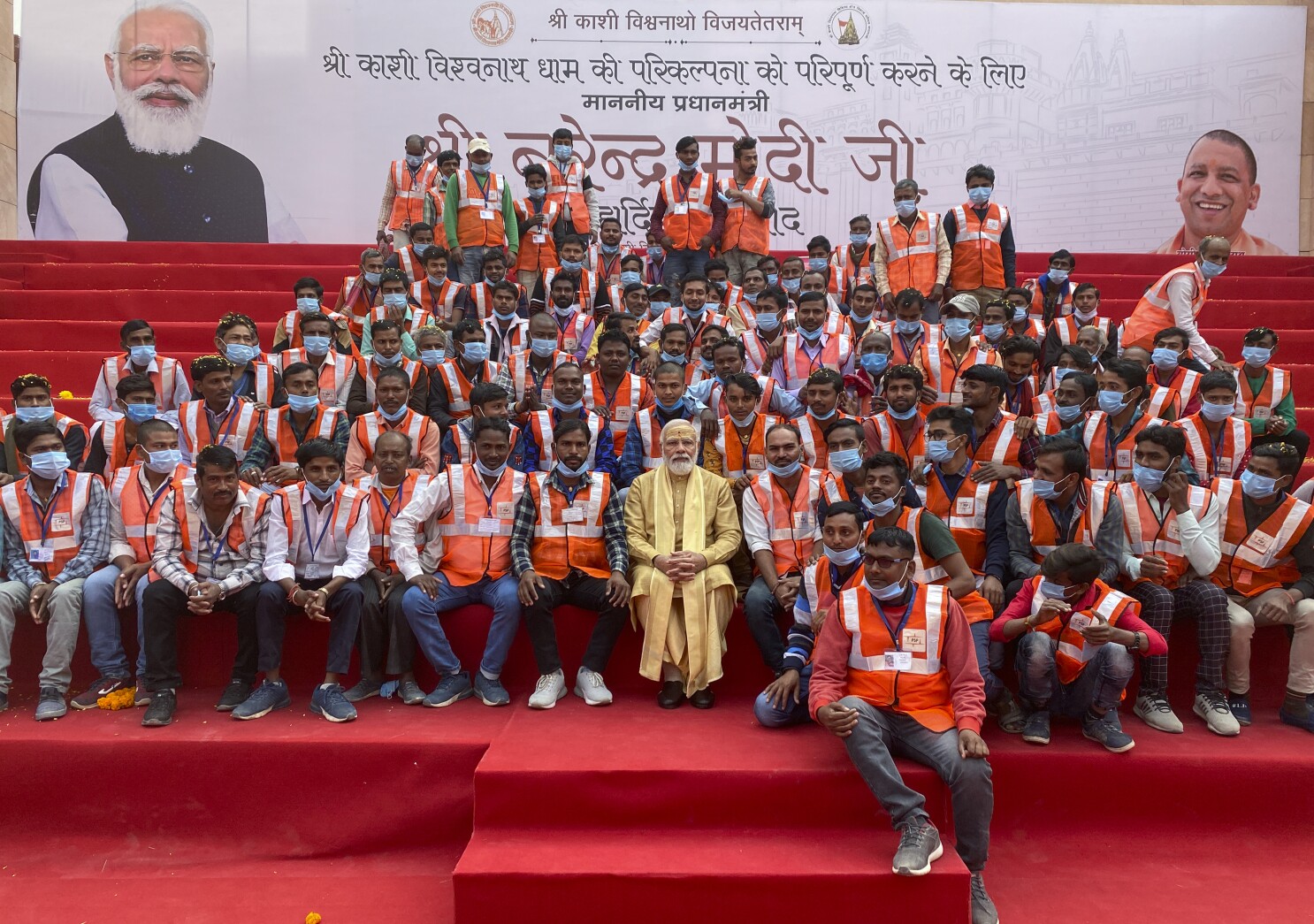 Dwelling on the glory of Kashi, Prime Minister Shri Modi said that Kashi is imperishable and is under the patronage of the Lord Shiva. He expressed his gratitude to every worker in the construction of this grand complex. They did not let even Corona stop the work here. He met and felicitated the workers. Shri Modi had his lunch with the workers who worked for the construction of the Dham. The Prime Minister also lauded the artisans, people associated with the construction, administration and those families who had their homes here. Along with all this, he also congratulated the UP government, Chief Minister Shri Yogi Adityanath, who toiled relentlessly to complete the Kashi Vishwanath Dham project.

IF THERE IS AN AURANGZEB, SHIVAJI IS ALSO THERE 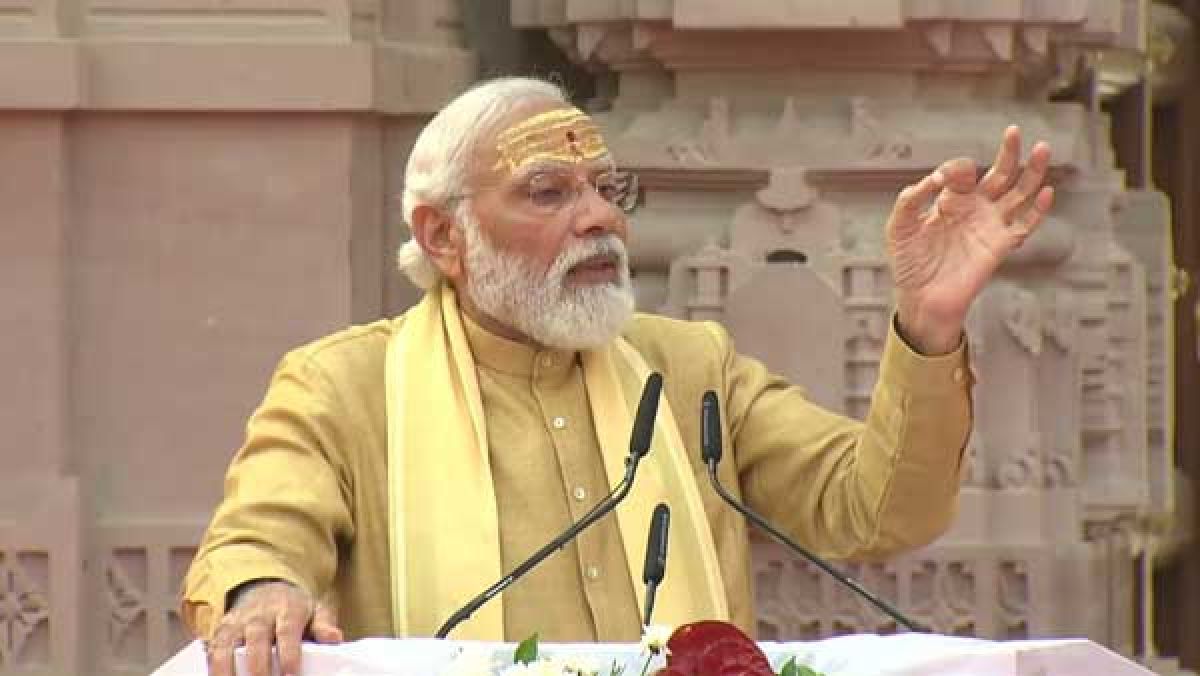 Prime Minister Shri Modi said the invaders attacked this city, tried to destroy it. The city is witness to the history of Aurangzeb’s atrocities and his terror, who tried to change civilization by the sword, who tried to crush the culture with fanaticism. But the soil of this country is different from the rest of the world. If there is an Aurangzeb, said the Prime Minister, Shivaji is also there. If any Salar Masood comes, then brave warriors like King Suheldev make him taste the might of India’s unity. And even during the British era, the people of Kashi knew what happened to Hastings, said Shri Modi.

JAGADGURU SHANKARACHARYA GOT INSPIRATION FROM HERE

The Prime Minister went on describing the grace and importance of Kashi. He remarked that Kashi is not a matter of mere words, it is a creation of sensations. Kashi is that – where awakening is life; Kashi is that – where death is also a festival; Kashi is that – where truth is the culture; Kashi is where love is tradition. He added that Varanasi is the city from where Jagadguru Shankaracharya got inspiration from the purity of Shri Dome Raja and resolved to unite the country in the thread of unity. This is the place where Goswami Tulsidas created a celestial creation like Ramcharitmanas with inspiration from Lord Shankar. The Prime Minister continued and said that Lord Buddha’s enlightenment was revealed to the world in Sarnath, here. For the betterment of the society, sages like Kabirdas appeared here. If there was a need to unite the society, then this Kashi became the center of the power of devotion of Sant Raidas, the Prime Minister added. The Prime Minister said Kashi is the land of four Jain Tirthankaras, the epitome of non-violence and austerity. From the integrity of King Harishchandra to the knowledge of Vallabhacharya, Ramanand ji. From Chaitanya Mahaprabhu, Samarth Guru Ramdas to Swami Vivekananda, Madan Mohan Malaviya. The Holy land of Kashi has been home to sages, acharyas beyond count. The Prime Minister remarked that Chhatrapati Shivaji Maharaj came here. From Rani Lakshmi Bai to Chandrashekhar Azad, Kashi has been the karmbhoomi of many fighters. Talents like Bharatendu Harishchandra, Jaishankar Prasad, Munshi Premchand, Pandit Ravi Shankar, and Bismillah Khan are from this great city, he said.

Shri Modi said that dedication of Kashi Vishwanath Dham will give a decisive direction to India and will lead to a brighter future. This complex is a witness of our capability and our duty. With determination and concerted thought, nothing is impossible. The Prime Minister said “Indians have the power to make the unimaginable come true. We know tapasya, know penance and we know how to spend day and night for the country. No matter how big the challenge, we Indians can defeat it together”.

PM Shri Narendra Modi said today’s India is reviving its lost heritage. Here in Kashi, Mata Annapurna herself resides. He expressed happiness that the statue of Mother Annapurna, which was stolen from Kashi, has now been re-established in Kashi after a wait of a century.

Shri Modi said for him, God comes in the form of people and for him every Indian is a part of God. He asked for three resolutions from the people for the country – cleanliness, creation and continuous efforts for self-reliant India.

The Prime Minister called cleanliness a way of life and called for people’s participation in this enterprise,especially in the Namami Gange Mission. The Prime Minister said the long period of slavery broke our confidence in such a way that we lost faith in our own creation. Today, from this thousand-year-old Kashi, I call upon every countryman – create with full confidence, innovate, do it in an innovative way.
The Prime Minister said that the third resolution that needs to be taken today is to raise our efforts for self-reliant India. In this ‘Amrit Kaal’, in the 75th year of independence, we will have to work for what India will be like when India celebrates a hundred years of independence.

• Vishwanath Dham is not just a grand building. This is a symbol of the Sanatan culture of India. It is a symbol of our spiritual soul.
• Vishwanath Dham is a symbol of India’s antiquity, traditions, India’s energy and dynamism.
• Earlier the temple area was only 3000 square feet which  has now been enlarged to about 5 lakh square feet. Now 50000 – 75000 devotees can visit the temple and temple premises.
• The dedication of Kashi Vishwanath Dham will give a decisive direction to India and will lead to a brighter future. This complex is a witness of our capability and our duty. With determination and concerted thought, nothing is impossible.
• For me God comes in the form of people, For me every person is a part of God. I ask three resolutions from the people for the country – cleanliness, creation and continuous efforts for self-reliant India.
• Long period of slavery broke our confidence in such a way that we lost faith in our own creation. Today, from this thousands-year-old Kashi, I call upon every countryman – create with full confidence, innovate, do it in an innovative way.
• PM Shri Narendra Modi felicitated and had lunch with the workers who worked on the construction Kashi Vishwanath Dham.