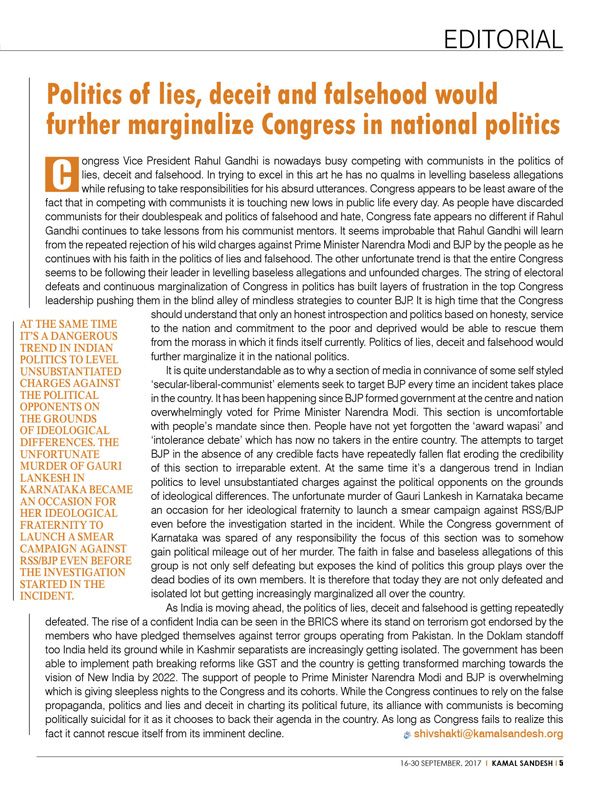 Congress Vice President Rahul Gandhi is nowadays busy competing with communists in the politics of lies, deceit and falsehood. In trying to excel in this art he has no qualms in levelling baseless allegations while refusing to take responsibilities for his absurd utterances. Congress appears to be least aware of the fact that in competing with communists it is touching new lows in public life every day. As people have discarded communists for their doublespeak and politics of falsehood and hate, Congress fate appears no different if Rahul Gandhi continues to take lessons from his communist mentors. It seems improbable that Rahul Gandhi will learn from the repeated rejection of his wild charges against Prime Minister Narendra Modi and BJP by the people as he continues with his faith in the politics of lies and falsehood. The other unfortunate trend is that the entire Congress seems to be following their leader in levelling baseless allegations and unfounded charges. The string of electoral defeats and continuous marginalization of Congress in politics has built layers of frustration in the top Congress leadership pushing them in the blind alley of mindless strategies to counter BJP. It is high time that the Congress should understand that only an honest introspection and politics based on honesty, service to the nation and commitment to the poor and deprived would be able to rescue them from the morass in which it finds itself currently. Politics of lies, deceit and falsehood would further marginalize it in the national politics.

It is quite understandable as to why a section of media in connivance of some self styled ‘secular-liberal-communist’ elements seek to target BJP every time an incident takes place in the country. It has been happening since BJP formed government at the centre and nation overwhelmingly voted for Prime Minister Narendra Modi. This section is uncomfortable with people’s mandate since then. People have not yet forgotten the ‘award wapasi’ and ‘intolerance debate’ which has now no takers in the entire country. The attempts to target BJP in the absence of any credible facts have repeatedly fallen flat eroding the credibility of this section to irreparable extent. At the same time it’s a dangerous trend in Indian politics to level unsubstantiated charges against the political opponents on the grounds of ideological differences. The unfortunate murder of Gauri Lankesh in Karnataka became an occasion for her ideological fraternity to launch a smear campaign against RSS/BJP even before the investigation started in the incident. While the Congress government of Karnataka was spared of any responsibility the focus of this section was to somehow gain political mileage out of her murder. The faith in false and baseless allegations of this group is not only self defeating but exposes the kind of politics this group plays over the dead bodies of its own members. It is therefore that today they are not only defeated and isolated lot but getting increasingly marginalized all over the country.

As India is moving ahead, the politics of lies, deceit and falsehood is getting repeatedly defeated. The rise of a confident India can be seen in the BRICS where its stand on terrorism got endorsed by the members who have pledged themselves against terror groups operating from Pakistan. In the Doklam standoff too India held its ground while in Kashmir separatists are increasingly getting isolated. The government has been able to implement path breaking reforms like GST and the country is getting transformed marching towards the vision of New India by 2022. The support of people to Prime Minister Narendra Modi and BJP is overwhelming which is giving sleepless nights to the Congress and its cohorts. While the Congress continues to rely on the false propaganda, politics and lies and deceit in charting its political future, its alliance with communists is becoming politically suicidal for it as it chooses to back their agenda in the country. As long as Congress fails to realize this fact it cannot rescue itself from its imminent decline.