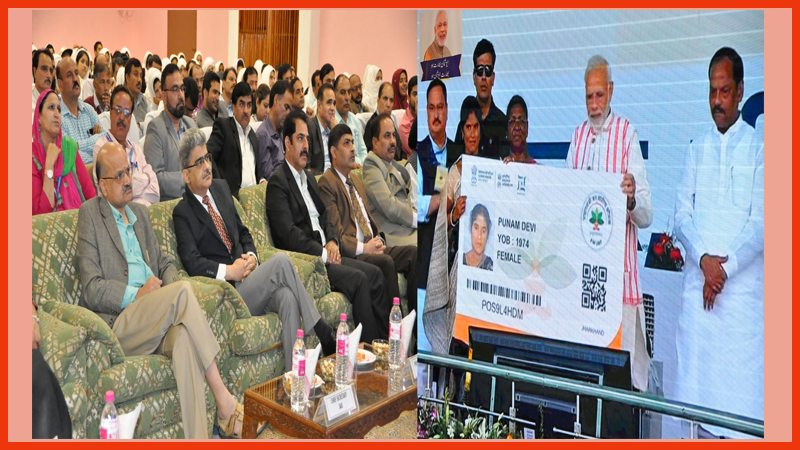 Prime Minister Shri Narendra Modi on September 23 launched the Pradhan Mantri Jan Arogya Yojana-Ayushman Bharat in Ranchi and termed it a game-changer initiative to serve the poor. “PMJAY-Ayushman Bharat is the biggest government-sponsored healthcare scheme in the world. The number of beneficiaries is almost equal to the population of Canada, Mexico and the US taken together,” Shri Modi said.

In an apparent reference to the Congress, he said without empowering the poor, previous governments had indulged in “vote bank politics”. “It is the BJP government that is focused on empowering them (poor people),” he said.

The magnitude of the scheme could be gauged from the fact that more than 1,300 ailments are covered under it, including heart diseases, kidney and liver disorders and diabetes, the PM said. “People are calling the scheme Modicare and by other names, but for me it is an opportunity to serve the poor. Even the ones living in the lowest strata of the society will benefit from the scheme,” he said.

Congratulating the team that was instrumental in the programme’s implementation, he said, “I hope and pray that the poor don’t have to visit hospitals, but, if they do, the Ayushman cover will be at their service. The poor of my country must get all facilities that the rich enjoy.”

Reiterating the slogan “Sabka saath, sabka vikas” (together for all, development for all), Modi said the Ayushman scheme is not based on any communal or caste lines. “The programme will not differentiate between people, based on religion, caste, location. Every eligible person will be able to avail of the benefits,” he asserted.

The health scheme will set an example for countries across the world, Modi said. “No one needs to register for the initiative. A health card would be provided to the beneficiaries for availing of the benefits. A toll-free number will be made available to the people for finding out more about the scheme,” he said.

Shri Modi also said that 2,500 modern hospitals would come up in tier-II and tier-III cities and would generate employment opportunities. “A total of 13,000 hospitals have become a part of the Ayushman Bharat scheme. Our government has taken a holistic approach to lay stress on affordable and preventive healthcare,” he added.

Earlier in the day, the PM doled out token health cards to some of the beneficiaries after his arrival at Prabhat Tara Maidan in Ranchi . He also laid foundations stones of two medical colleges at Chaibasa and Koderma in the state.

This Ayushman Bharat Yojana targets around 10 crore families that can be categorized as poor also vulnerable population.
Billed as the world’s largest government healthcare programme, it will be funded with 60 per cent contribution coming from the Centre and remaining from the states.

The scheme will target poor, deprived rural families and identified occupational category of urban workers’ families, 8.03 crore in rural and 2.33 crore in urban areas, as per the latest Socio-Economic Caste Census (SECC) data. It will cover around 50 crore people and there is no cap on family size and age in the scheme ensuring that nobody is left out.

Over 8,735 hospitals, both public and private, have been empanelled for the scheme, and as many as 31 states and union territories have signed MoUs with the Centre and will implement the programme. Telangana, Odisha, Delhi, Kerala and Punjab are not among the states which have opted for the scheme. Union Health Minister Shri J P Nadda, who recently visited the Jharkhand capital, had said that money would not go to any person. It would go from institution to institution with the Centres contribution being 60 per cent and the states 40 per cent.