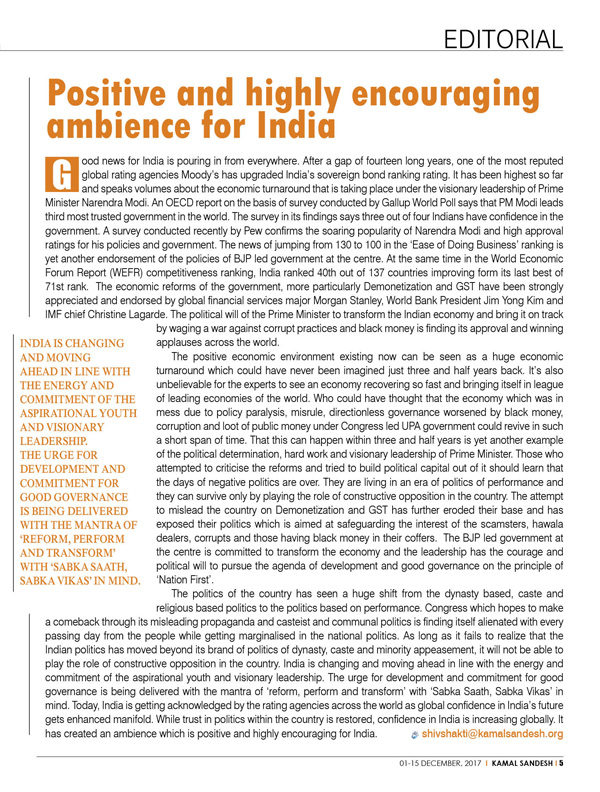 Good news for India is pouring in from everywhere. After a gap of fourteen long years, one of the most reputed global rating agencies Moody’s has upgraded India’s sovereign bond ranking rating. It has been highest so far and speaks volumes about the economic turnaround that is taking place under the visionary leadership of Prime Minister Narendra Modi. An OECD report on the basis of survey conducted by Gallup World Poll says that PM Modi leads third most trusted government in the world. The survey in its findings says three out of four Indians have confidence in the government. A survey conducted recently by Pew confirms the soaring popularity of Narendra Modi and high approval ratings for his policies and government. The news of jumping from 130 to 100 in the ‘Ease of Doing Business’ ranking is yet another endorsement of the policies of BJP led government at the centre. At the same time in the World Economic Forum Report (WEFR) competitiveness ranking, India ranked 40th out of 137 countries improving form its last best of 71st rank. The economic reforms of the government, more particularly Demonetization and GST have been strongly appreciated and endorsed by global financial services major Morgan Stanley, World Bank President Jim Yong Kim and IMF chief Christine Lagarde. The political will of the Prime Minister to transform the Indian economy and bring it on track by waging a war against corrupt practices and black money is finding its approval and winning applauses across the world.

The positive economic environment existing now can be seen as a huge economic turnaround which could have never been imagined just three and half years back. It’s also unbelievable for the experts to see an economy recovering so fast and bringing itself in league of leading economies of the world. Who could have thought that the economy which was in mess due to policy paralysis, misrule, directionless governance worsened by black money, corruption and loot of public money under Congress led UPA government could revive in such a short span of time. That this can happen within three and half years is yet another example of the political determination, hard work and visionary leadership of Prime Minister. Those who attempted to criticise the reforms and tried to build political capital out of it should learn that the days of negative politics are over. They are living in an era of politics of performance and they can survive only by playing the role of constructive opposition in the country. The attempt to mislead the country on Demonetization and GST has further eroded their base and has exposed their politics which is aimed at safeguarding the interest of the scamsters, hawala dealers, corrupts and those having black money in their coffers. The BJP led government at the centre is committed to transform the economy and the leadership has the courage and political will to pursue the agenda of development and good governance on the principle of ‘Nation First’.

The politics of the country has seen a huge shift from the dynasty based, caste and religious based politics to the politics based on performance. Congress which hopes to make a comeback through its misleading propaganda and casteist and communal politics is finding itself alienated with every passing day from the people while getting marginalised in the national politics. As long as it fails to realize that the Indian politics has moved beyond its brand of politics of dynasty, caste and minority appeasement, it will not be able to play the role of constructive opposition in the country. India is changing and moving ahead in line with the energy and commitment of the aspirational youth and visionary leadership. The urge for development and commitment for good governance is being delivered with the mantra of ‘reform, perform and transform’ with ‘Sabka Saath, Sabka Vikas’ in mind. Today, India is getting acknowledged by the rating agencies across the world as global confidence in India’s future gets enhanced manifold. While trust in politics within the country is restored, confidence in India is increasing globally. It has created an ambience which is positive and highly encouraging for India.