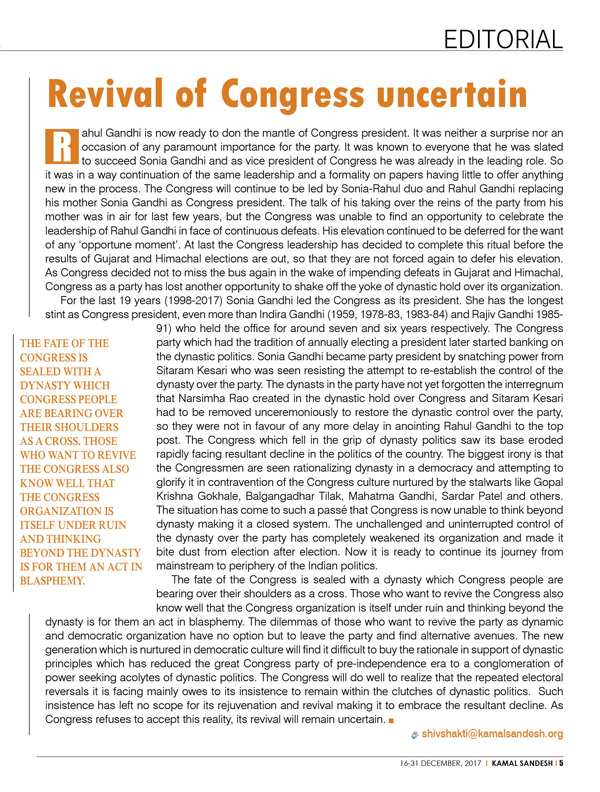 Rahul Gandhi is now ready to don the mantle of Congress president. It was neither a surprise nor an occasion of any paramount importance for the party. It was known to everyone that he was slated to succeed Sonia Gandhi and as vice president of Congress he was already in the leading role. So it was in a way continuation of the same leadership and a formality on papers having little to offer anything new in the process. The Congress will continue to be led by Sonia-Rahul duo and Rahul Gandhi replacing his mother Sonia Gandhi as Congress president. The talk of his taking over the reins of the party from his mother was in air for last few years, but the Congress was unable to find an opportunity to celebrate the leadership of Rahul Gandhi in face of continuous defeats. His elevation continued to be deferred for the want of any ‘opportune moment’. At last the Congress leadership has decided to complete this ritual before the results of Gujarat and Himachal elections are out, so that they are not forced again to defer his elevation. As Congress decided not to miss the bus again in the wake of impending defeats in Gujarat and Himachal, Congress as a party has lost another opportunity to shake off the yoke of dynastic hold over its organization.

For the last 19 years (1998-2017) Sonia Gandhi led the Congress as its president. She has the longest stint as Congress president, even more than Indira Gandhi (1959, 1978-83, 1983-84) and Rajiv Gandhi 1985-91) who held the office for around seven and six years respectively. The Congress party which had the tradition of annually electing a president later started banking on the dynastic politics. Sonia Gandhi became party president by snatching power from Sitaram Kesari who was seen resisting the attempt to re-establish the control of the dynasty over the party. The dynasts in the party have not yet forgotten the interregnum that Narsimha Rao created in the dynastic hold over Congress and Sitaram Kesari had to be removed unceremoniously to restore the dynastic control over the party, so they were not in favour of any more delay in anointing Rahul Gandhi to the top post. The Congress which fell in the grip of dynasty politics saw its base eroded rapidly facing resultant decline in the politics of the country. The biggest irony is that the Congressmen are seen rationalizing dynasty in a democracy and attempting to glorify it in contravention of the Congress culture nurtured by the stalwarts like Gopal Krishna Gokhale, Balgangadhar Tilak, Mahatma Gandhi, Sardar Patel and others. The situation has come to such a passé that Congress is now unable to think beyond dynasty making it a closed system. The unchallenged and uninterrupted control of the dynasty over the party has completely weakened its organization and made it bite dust from election after election. Now it is ready to continue its journey from mainstream to periphery of the Indian politics.

The fate of the Congress is sealed with a dynasty which Congress people are bearing over their shoulders as a cross. Those who want to revive the Congress also know well that the Congress organization is itself under ruin and thinking beyond the dynasty is for them an act in blasphemy. The dilemmas of those who want to revive the party as dynamic and democratic organization have no option but to leave the party and find alternative avenues. The new generation which is nurtured in democratic culture will find it difficult to buy the rationale in support of dynastic principles which has reduced the great Congress party of pre-independence era to a conglomeration of power seeking acolytes of dynastic politics. The Congress will do well to realize that the repeated electoral reversals it is facing mainly owes to its insistence to remain within the clutches of dynastic politics. Such insistence has left no scope for its rejuvenation and revival making it to embrace the resultant decline. As Congress refuses to accept this reality, its revival will remain uncertain.