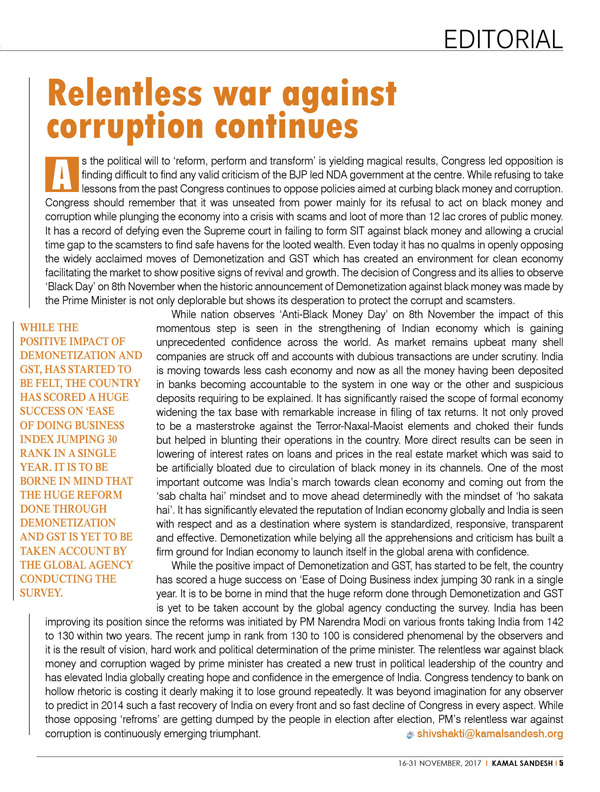 As the political will to ‘reform, perform and transform’ is yielding magical results, Congress led opposition is finding difficult to find any valid criticism of the BJP led NDA government at the centre. While refusing to take lessons from the past Congress continues to oppose policies aimed at curbing black money and corruption. Congress should remember that it was unseated from power mainly for its refusal to act on black money and corruption while plunging the economy into a crisis with scams and loot of more than 12 lac crores of public money. It has a record of defying even the Supreme court in failing to form SIT against black money and allowing a crucial time gap to the scamsters to find safe havens for the looted wealth. Even today it has no qualms in openly opposing the widely acclaimed moves of Demonetization and GST which has created an environment for clean economy facilitating the market to show positive signs of revival and growth. The decision of Congress and its allies to observe ‘Black Day’ on 8th November when the historic announcement of Demonetization against black money was made by the Prime Minister is not only deplorable but shows its desperation to protect the corrupt and scamsters.

While nation observes ‘Anti-Black Money Day’ on 8th November the impact of this momentous step is seen in the strengthening of Indian economy which is gaining unprecedented confidence across the world. As market remains upbeat many shell companies are struck off and accounts with dubious transactions are under scrutiny. India is moving towards less cash economy and now as all the money having been deposited in banks becoming accountable to the system in one way or the other and suspicious deposits requiring to be explained. It has significantly raised the scope of formal economy widening the tax base with remarkable increase in filing of tax returns. It not only proved to be a masterstroke against the Terror-Naxal-Maoist elements and choked their funds but helped in blunting their operations in the country. More direct results can be seen in lowering of interest rates on loans and prices in the real estate market which was said to be artificially bloated due to circulation of black money in its channels. One of the most important outcome was India’s march towards clean economy and coming out from the ‘sab chalta hai’ mindset and to move ahead determinedly with the mindset of ‘ho sakata hai’. It has significantly elevated the reputation of Indian economy globally and India is seen with respect and as a destination where system is standardized, responsive, transparent and effective. Demonetization while belying all the apprehensions and criticism has built a firm ground for Indian economy to launch itself in the global arena with confidence.

While the positive impact of Demonetization and GST, has started to be felt, the country has scored a huge success on ‘Ease of Doing Business index jumping 30 rank in a single year. It is to be borne in mind that the huge reform done through Demonetization and GST is yet to be taken account by the global agency conducting the survey. India has been improving its position since the reforms was initiated by PM Narendra Modi on various fronts taking India from 142 to 130 within two years. The recent jump in rank from 130 to 100 is considered phenomenal by the observers and it is the result of vision, hard work and political determination of the prime minister. The relentless war against black money and corruption waged by prime minister has created a new trust in political leadership of the country and has elevated India globally creating hope and confidence in the emergence of India. Congress tendency to bank on hollow rhetoric is costing it dearly making it to lose ground repeatedly. It was beyond imagination for any observer to predict in 2014 such a fast recovery of India on every front and so fast decline of Congress in every aspect. While those opposing ‘refroms’ are getting dumped by the people in election after election, PM’s relentless war against corruption is continuously emerging triumphant.