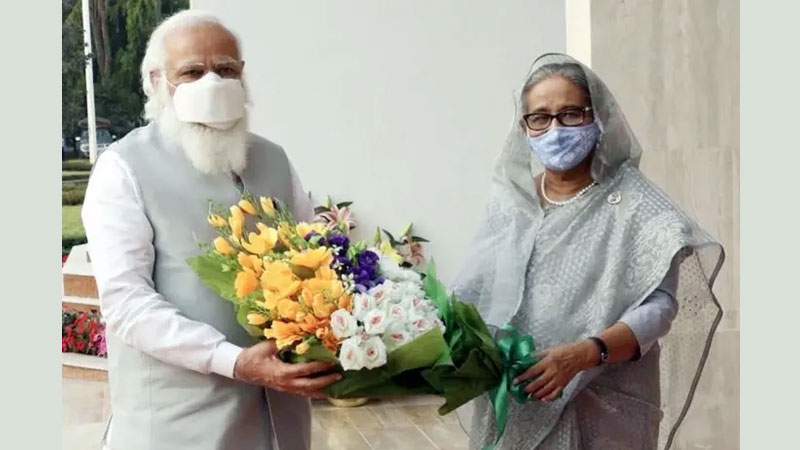 At the invitation of Prime Minister of Bangladesh, Smt. Sheikh Hasina, Prime Minister Shri Narendra Modi paid a State Visit to Bangladesh from 26 to 27 March 2021 to join the celebrations of the Golden Jubilee of the Independence of Bangladesh, the Birth Centenary of the Father of the Nation Bangabandhu Sheikh Mujibur Rahman and 50 years of establishment of diplomatic relations between India and Bangladesh. The visit symbolized the partnership of half-a-century between India and Bangladesh that has strengthened, matured and evolved as a model for bilateral relations for the entire region.

Both Prime Ministers held a tête-à-tête on 27 March 2021 which was followed by delegation level talks. Both the talks were marked by great warmth and cordiality. The two leaders expressed satisfaction at the excellent state of bilateral relations, based on deep historical and fraternal ties, which reflect an all-encompassing bilateral partnership based on equality, trust and understanding that transcends even a strategic partnership.

Prime Minister Sheikh Hasina expressed her deep appreciation and gratitude for the wholehearted support extended by the Government and people of India, during the critical days of Bangladesh’s Liberation War. Both Prime Ministers underscored the need for preserving the memory and legacy of the Great Liberation War. Prime Minister Shri Narendra Modi thanked the Government of Bangladesh for the decision to establish a memorial at Ashuganj in remembrance of the supreme sacrifices made by the valiant members of the Indian Armed Forces during Bangladesh’s War of Independence in 1971.

The two leaders expressed satisfaction on the progress of various decisions taken during the visit of Prime Minister Smt. Sheikh Hasina to Delhi in October 2019 and the Virtual Summit on 17 December 2020. Both sides also recalled the successful holding of the Sixth Meeting of the Joint Consultative Commission held in September 2020 and the visit of the External Affairs Minister, Dr. S Jaishankar to Dhaka on 4 March 2021.

The two Prime Ministers noted with satisfaction the continued exchange of high-level visits which have helped frame a better understanding on both sides on the various areas of cooperation. They also appreciated the regular holding of meetings of sectoral institutional mechanisms for sustaining the momentum of bilateral relations, particularly during the COVID period.

During the visit Prime Minister Shri Narendra Modi highlighted that Bangabandhu Sheikh Mujibur Rahman, one of the greatest leaders of modern times, will be remembered for his courage and indelible contribution to Bangladesh’s emergence as a sovereign country. He also recalled the contribution of Bangabandhu in nurturing peace, security and development in the region. Prime Minister Smt. Sheikh Hasina thanked India for conferring Gandhi Peace Prize for the year 2020 on Bangabandhu Sheikh Mujibur Rahman in recognition of his outstanding contributions towards social, economic and political transformation of Bangladesh through non-violent and other Gandhian methods.

Both Prime Ministers jointly inaugurated the Bangabandhu – Bapu Digital Exhibition in Dhaka, which celebrates the life and legacy of these iconic leaders. The two Prime Ministers affirmed that the legacy and ideals of the two great leaders would continue to inspire the people worldwide, particularly the youth, against oppression.
To mark the 50th anniversary of India-Bangladesh friendship, both sides released respective commemorative postage stamps. It was decided to commemorate 06 December as Maitri Diwas, the day when India recognized Bangladesh in the year 1971. The Indian side announced the establishment of Bangabandhu Chair at the University of Delhi. In view of the 50th anniversary of the Independence of Bangladesh as well as the establishment of bilateral diplomatic ties, both sides have agreed to jointly commemorate these epochal events in 19 select countries.
Both sides noted with satisfaction that the filming of the biopic on Bangabandhu Sheikh Mujibur Rahman, under the direction of Indian film director Shyam Benegal, has commenced and is expected to be completed according to schedule. Both sides stressed on the need to commence work on the Liberation War documentary at the earliest.

Prime Minister Shri Narendra Modi extended an invitation to Prime Minister Smt. Sheikh Hasina to visit India in 2022 in commemoration of the Golden Jubilee of the establishment of diplomatic relations.

The Bangladesh side welcomed the decision of the Government of India to announce 1000 Shuborno Jayanti Scholarships for Bangladeshi students for pursuing education/courses in India.

The two sides signed five Memorandum of Understandings (MoUs) covering areas such as connectivity, commerce, information technology and sports. In a humanitarian gesture, Shri Narendra Modi handed over a representational key of 109 ambulances to his counterpart Smt. Hasina. He also handed over a representational box to her as a symbol of India’s gift of 1.2 million COVID vaccine doses to Bangladesh.