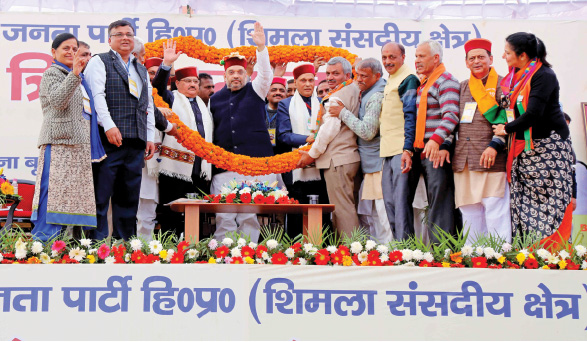 BJP National President Shri Amit Shah called upon the party’s Karyakartas to force Assembly polls before schedule, wipe out the corrupt Congress government and bring the BJP back to power, while addressing BJP’s booth-level workers from Solan, Sirmaur and Shimla districts of Himachal Pradesh, named ‘Tridev Sammelan’ on 11 December, 2016 in Solan.

At the first such rally in the poll-bound state after demonetization, Shri Shah lashed out at Chief Minister Virbhadra Singh over corruption charges and asked the people of the state, apart from party workers, to “wage such a struggle, which forces the Congress government to collapse under its own weight and corruption charges so that the people don’t have to wait for the polls”.

He said that the timing of the Himachal polls was such that if the Congress was defeated here, there would not be any chance elsewhere in the country. This would be a true fulfillment of the “Congress-mukt bharat” slogan given by Prime Minister Narendra Modi. Alleging that the incumbent regime was thoroughly corrupt, he said, “It is for the first time in history that a chief minister has deposited money acquired allegedly through corrupt means in his accounts. There is also no need for leaders such as former CM Shri Prem Kumar Dhumal or Union Health Minister Shri J P Nadda to allege that the state is not taking advantage of the Centre’s welfare initiatives because the local government is not keen on it and the CM is busy on making money.”

Thus, there was a need to replace the present dispensation with the BJP government, which will work in tandem with the PM Modi-led government at the Centre, he said.

Scams from Aakash to Pataal

Shri Amit Shah said the BJP was working to make India corruption free, but the country also needed to be made “Congress free”. In his 40-minute address, he said the Congress provided governments riddled with corruption and allowed black money to take roots in the economy. Scams worth Rs 12 lakh crore unfolded during the UPA regime, from the space, sky, sea and pataal (underground). There was a scam happening almost every month. “But now, and during two-and-a-half years of the Modi government, there was not a single case of corruption. The Prime Minister is coming out with a new scheme every 15 days. Despite this, Congress vice-president Rahul Gandhi is still asking what Modi has done.”

On demonetization, he said the Prime Minister had asked only 50 days from the people to clean up the black money mess. We are aware of the problems of the people but it’s surgery to treat a chronic disease spread through the body during 70 years, he added.