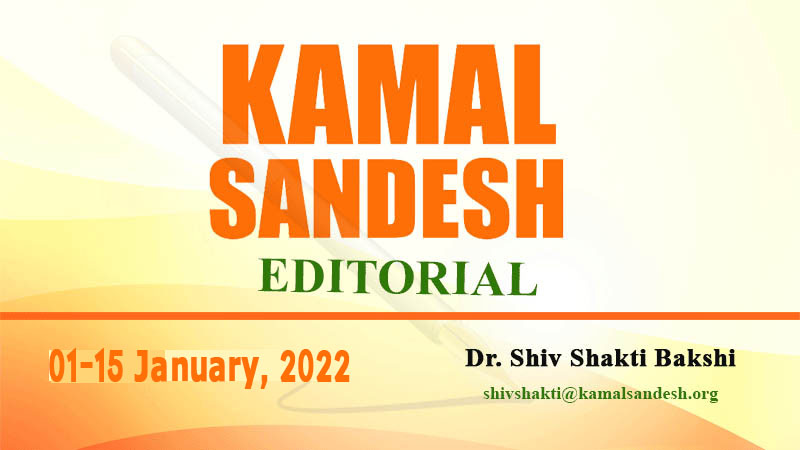 As Prime Minister Shri Narendra Modi inaugurated Shri Kashi Vishwanath Dham Carridor in Varanasi, India moved further in the direction of restoring the grandeur and glory of its centres of civilization and culture which continue to inspire the nation. The people across the nation celebrated this blessed occasion by participating in ‘Divya Kashi, Bhavya Kashi’ programme in millions. Most recently, the Kedarnath Dham was also restored and renovated after it withstood the ravages of the floods few years back. The work of building a grand Shri Ram Temple in Ayodhya is also progressing in a fast pace and will be completed very soon. In continuation of these efforts, Kartarpur corridor which was built recently and closed in the wake of Covid-19 pandemic has been reopened for the pilgrims. The centres of civilization and culture are in fact the power houses from where the nation gets energy and dynamism for its journey into bright future ahead.

The hitherto neglected civilizational and cultural strength of India has become a source of inspiration in recent times. It started with Prime Minister Shri Narendra Modi’s initiative in UN to declare 21st June as ‘International Yoga Day’ every year. It received overwhelmingly the support of 177 countries as co-sponsors of the resolution. While ‘Yoga’ has become a boon for the entire humanity, the Covid-19 pandemic has seen increasing acceptance of yoga across the globe. The initiative of the Prime Minister in gifting Shrimad Bhagwad Geeta to foreign dignitaries during meetings and inviting them for ‘Ganga Aarti’ and ‘Mandir Darshan’ has further highlighted the amazing spiritual tradition of India across the world. While remaining committed to the principles of ‘Vasudhaiva Kutumbakam’, Shri Narendra Modi also visited the sacred places in other countries including Nepal and Bangladesh and even offered 500 quintals of sandalwood to Bhagwan Pashupatinath Temple in Kathmandu. The opening of Nathu-La pass for Kailash Mansarovar pilgrimage and building of temple in Abu Dhabi with the active support of UAE government are glowing example of the reverence with which the world now sees India’s cultural and spiritual heritage.

While stolen artefacts, antiques and images of revered gods and goddesses and being recovered and brought back in India, massive efforts are on to rejuvenated heritage towns and centres of pilgrimage through HRIDAY and PRASHAD schemes. The ‘Namami Gange’ scheme aimed at rejuvenating and cleaning river Ganga is seeing collaborations of many European countries who are deploying advance techniques to fulfil the long held aspirations of the nation to see a pure and clean Maa Ganga flowing through the country. While Kumbh Mela has been recognized by UNESCO, it’s heartening to see that Durga Pujo of West Bengal has also been accorded UNESCO recognition now. The construction of Char Dham, Rama circuit, Krishna circuit, Budha circuit, Panchtirtha are examples of the massive work going on in the country to unleash the civilization and cultural power of India.

Prime Minister Shri Narendra Modi has rightly observed that long period of slavery broke nation’s confidence in such a way that it lost faith in its own creation. The initiatives taken by the Prime Minister is not only rescuing the civilizational and cultural centres but actively unleashing their potential in shaping ‘Ek Bharat, Shreshtha Bharat’ shining around the world with the newfound self confidence and strength. While Congress and its allies are indulging in sabotaging democracy by disrupting parliament, the people across India are strongly supporting the initiatives of Modi government transforming India. There is no doubt that a ‘Self-reliant’ India is emerging from its civilzational centres.