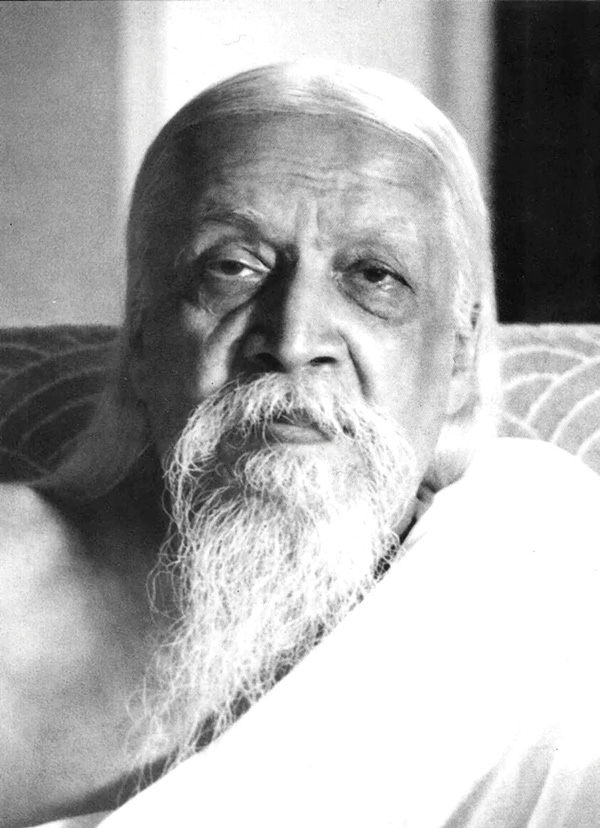 Aravind Ghose, born in Calcutta on 15th August 1872, lived 78 years. He passed from this life in Pondicherry on 5th December,1950.

Wholly educated in England along with his two brothers, he was given an entirely Western education by their Anglophile father. After infant schooling at a convent in Darjeeling, they were taken to England to live with a clergyman’s family in Manchester. From there they joined St. Paul’s public school in West London, and later went on to Cambridge Unversity. There Sri Aurobindo was a brilliant scholar, winning record marks in the Classical Tripos examination. But he had already been touched by a will for the Independence of India, and did not wish to become an official of the colonial administration – the position his father and his education had marked him out for. He managed to disqualify himself by failing to take the mandatory riding test, and instead returned to India in 1893 in the service of the Indian princely State of Baroda, where he remained up to 1906.

In that year he returned to his birthplace, Calcutta, as the first Principal of the new Bengal National College. He resigned that post because of his increasingly active involvement in the Nationalist Movement. Sri Aurobindo was the first of the Nationalist leaders to insist on full independence for India as the goal of the movement, and for several years he lent all his considerable abilities and energies to this struggle. This led to him being arrested on a charge of treason and being kept in solitary confinement for almost a year as an ‘under trial’ prisoner in Alipore jail. During this time he had a number of fundamental spiritual experiences which convinced him of the truth of the “Sanatana Dharma” – the ancient spiritual knowledge and practice of India.

After he was acquitted and released, this spiritual awareness led him to take refuge from continuing pursuit by the British authorities in Pondicherry, then part of French India, where he devoted himself intensively to the exploration of the new possibilities it opened up to him. Supported by his spiritual collaborator, The Mother, and using his new-found spiritual capacities, he continued to work tirelessly for the upliftment of India and the world. When India gained its Independence on 15.8.1947, he responded to the request for a message to his countrymen by speaking of five dreams that he had worked for, and which he now saw on the way to fulfilment.

These five Dreams were:

“…a revolutionary movement which would create a free and united India.”
“… the resurgence and liberation of the peoples of Asia and her return to her great role in the progress of human civilization.”
“… a world-union forming the outer basis of a fairer, brighter and nobler life for all …[people].”
“… the spiritual gift of India to the world.”

“…a step in evolution which would raise…[humans] to a higher and larger consciousness and begin the solution of the problems which have perplexed and vexed […them] since […they] first began to think and to dream of individual perfection and a perfect society.”

The great originality of Sri Aurobindo is to have fused the modern scientific concept of evolution with the perennial gnostic experience of an all-pervading divine consciousness supporting all phenomenal existence. His synthesis was not a philosophic construct, but a realisation stemming from direct spiritual experience. The unfolding of more and more complex forms and higher levels of consciousness out of an original total material inconscience is seen as the gradual return to self-awareness and the diverse self-expression of involved Spirit. This process is evidently not complete, and the evolution of higher levels of consciousness and less unconscious forms of expression are to be expected.

But with the development of Mind, individual human beings can, if they choose, use their will and intelligence to begin to participate consciously in this process of self-discovery and self-exploration. This knowledge founds an optimistic and dynamic world-view, which gives each individual a meaningful place in a progressive cosmic unfolding, and casts our understanding of human endeavour, whether individual or collective, in a new and purposeful perspective. Many facets of this world-view are elaborated in the 35 volumes of Sri Aurobindo’s Collected Works.