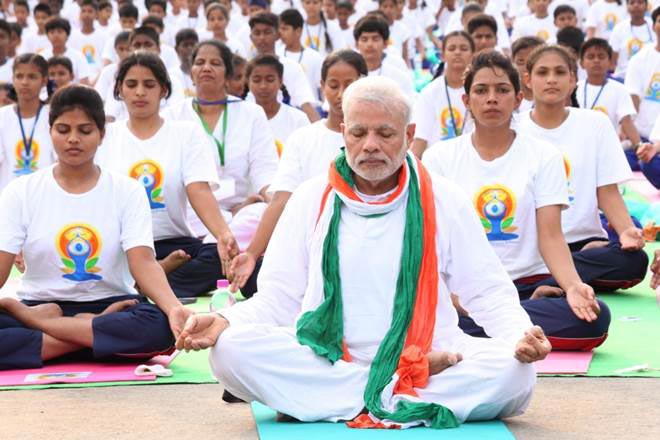 Prime Minister Shri Narendra Modi on May 28 addressed the people through his 32nd episode of the monthly ‘Mann Ki Baat’ programme. It was his first Mann Ki Baat after completion of 3 years of NDA government.

Here are the highlights of PM Modi’s address:

I convey my hearty greetings to all fellow Indians and everyone across the world, especially the Muslim brethren at the advent of this auspicious month of Ramazan.

We, Indians, are very lucky that our ancestors have created such a tradition that today India and and its 1.25 billion people can take pride in the fact that people from all communities and faith are available here.

I am happy that our young generation is keen to know about our history and sacrifices made by our freedom fighters.
Many years ago, I visited Andaman & Nicobar Islands. I went to see the Cellular Jail there. Today is the birth anniversary of Veer Savarkarji. Veer Savarkarji had written a book “Majhi Jannmathep” while in incarceration . He used to write poems on the walls of his prison cell. He was confined to a very small cell. These seekers freedom must have gone through immense torture. I was inspired to visit the Cellular Jail only after reading Savarkarji’s book “Maazi Janmthep”.

5th June is World Environment Day. This year the UN have chosen ‘Connecting People to Nature’ theme These days , I keep receiving news from our states. Almost in every state, a big plantation campaign gets underway with the onset of monsoon. Millions of trees are planted. School children, social organizations and NGOs also get connected with the campaign. Even State Governments take an initiative. Let us also make our contribution in enhancing this campaign
If we shall protect the environment, our future generations will reap the benefits. Vedas, describe the Earth and the Environment as the basic sources of energy. And, Atharva Veda, written thousands of years ago, is the most authentic guiding scripture about nature and environment. In India, it has been said – “Earth is the mother and I am her son”. According to Vedas, the purity within us is because of the Earth. The Earth is our mother and we all are her children. If we recall Lord Buddha, a fact comes to light that his birth, his enlightenment and his Mahaparinirvana, all three happened under a tree.
In a very short time, 21st June has got worldwide recognition as World Yoga day and is connecting people. At a time when separatist forces are raising their ugly heads this has been India’s great contribution to the world.. We have successfully connected the whole world through Yoga. 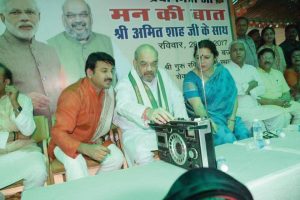 The Central Government has along with State Governments and with the cooperation of municipal representatives of cities decided to launch a massive and important campaign of  waste management. On the occasion of World Environment Day on 5th June, there are going to be litter bins made available to collect solid waste and liquid waste in 4000 towns of the country.
It is with great happiness that I wish to tell you, that I am given to understand that under the aegis of ‘Swachch Bharat Campaign’, the Riyasi Block in Jammu and Kashmir has become completely free of open defecation.

Three years ago you vested the responsibility of ‘Pradhan Sewak’- the Chief Servant of the People upon me. There have been many surveys and several opinion polls. I see this entire process as a very healthy sign. The works done during these years were tested on every touch stone . It was analyzed by every segment of society. And this is a great process in democracy.
I now feel, that when I had first started ‘Mann Ki Baat,’ I had not given thought to the fact that ‘Mann Ki Baat’ would make me a member of every family in India.