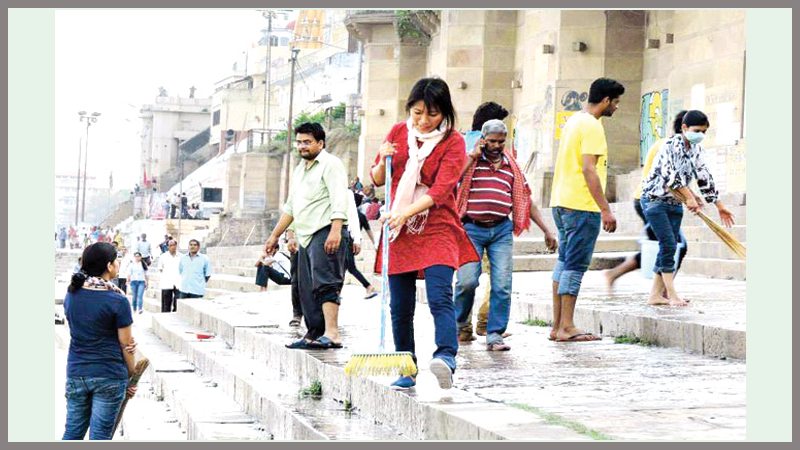 I didn’t see Mahatma Gandhi but I grew up hearing all about him, reading stories about him.

When I left Nagaland and ventured out, I noticed the filth. Whether it was Delhi, Dimapur or other places that I went to, I saw garbage and felt that it was standard. I saw that we were totally used to it. We were at ease with how things were. Forget hope, we were not even thinking about changing anything.

Being clean or want of cleanliness is something which is inherent to almost every living being. I am sure that not a single day passed when our houses are not cleaned.

I started wondering if we were failing Mahatma Gandhi ji.

These words may not be adequate to express the pain, anguish and helplessness that I experienced seeing the very spirit of “vaishnava jana to, tene kahiye je peer paraayi jaane re” wither away. I could see how filth was maiming the poor and there was no escape for them. And my efforts were just a drop in the ocean.

Those were the most depressing days of my life, for I could not get used to the filth around me, could not give up doing something about it and steadily saw all the willpower I had diminishing.

Then came 15 August 2014, I was listening to Prime Minister Narendra Modi speak from the ramparts of the Red fort. It was a speech which conveyed a sense of urgency, a sense of mission. As if he was clearly underlining the necessity of doing things in time. Every effort was to count. And then came the part which shook me from slumber and changed everything for me.

I still remember the exact words – He said “I come from a poor family, I have seen poverty. The poor need respect and it begins with cleanliness. I, therefore, have to launch a `clean India` campaign from 2nd October this year and carry it forward in 4 years. I want to make a beginning today itself!!” – I was intrigued, here was a PM who had dared to do away with the traditional ceremonial speech and turned it into a call for every Indian, at the risk of being mocked at, ridiculed for breaking a tradition of flowery speeches.

I listened to that speech over and over again, and when I look back now, I could clearly see that he had laid down a blue print of things to come before us. He had shown us a path to everyone who wanted to do something. He had so effortlessly conveyed to so many of us that he was there to spearhead every effort that was to benefit those who were just props in decision making, who were just numbers in the analytical jargon earlier.

We witnessed how he stood by each person doing his bit in this great effort of achieving Swachh Bharat by 2019, how he appreciated every single effort that contributed to the vision of Swachh Bharat. Every day we were listening about heroes from him, who were working to rid our nation of filth, everyday something was being done to change our attitude about how we looked at sanitation and the sanitation workers. He made us thankful to those were involved in keeping our surroundings clean.

He gave them the much needed dignity and self respect. He got us out, beyond those gates of our houses, out in the streets to take ownership of the sanitation around us. He made us strong enough that we stopped bothering about that “log kya kahenge” shackle. Four years later, the achievements speak for themselves.

Every single person is involved, even those cynical ones who are not doing anything are talking about sanitation. In such a way that they never did before. Never before have we discussed cleanliness so much.

From “what I will be able to achieve alone?”, citizens have successfully managed to be instrumental in massive cleanup campaigns which have transformed public places like never before. People are realizing the potential that they possess. Cleanliness has become a social and institutional priority.

The change is evident in the clean railway platforms, tracks, in the newly constructed toilets which take account of the fact that there are females in this world too, in our expectation that our surroundings must be clean and we will not watch helplessly.

There are avenues of resolution to our complaints. There are websites, apps which are being used. Technology is being explored to either minimise or do away with human contact while cleaning sewage or toxic garbage. Practice of home composting is spreading every single day with citizens vowing to manage their own garbage, at least whatever they could.

By answering the call of “Swachhata hi seva” we are living the spirit of “vaishnava jana to, tene kahiye je peed paraayi jaane re” for this is what Gandhi ji wanted us to strive for – to be sensitive to pain of others!!

And it’s just four years. We have just started. This war against filth has united us all. We are strongly heading in the direction where we will be one of the cleanest nations on earth.

By answering the call of “Swachhata hi seva” we are living the spirit of “vaishnava jana to, tene kahiye je peed paraayi jaane re” for this is what Gandhi ji wanted us to strive for – to be sensitive to pain of others. I am sure, wherever he is, he looks upon us – blesses us and smiles.