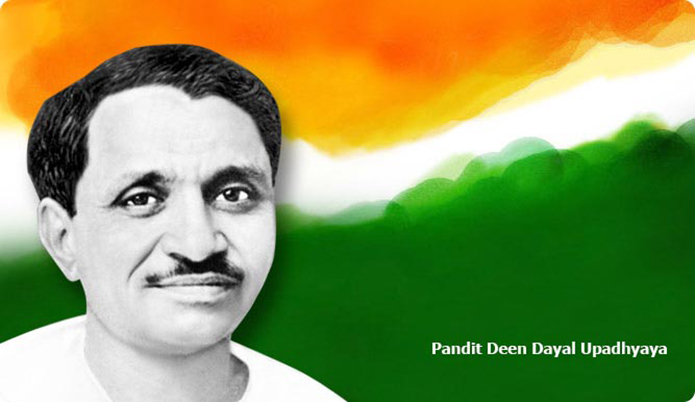 (This is the last part of the article on Deendayal ji)

It was his considered opinion that there can never be contentment in a system where desires are allowed unrestrained growth. Deendayalji believed that it will be suicidal to so exploit the exhaustible natural resources that nature will not be able to replenish them in the normal course. Nature’s resources have their limits. Therefore, they should be used with restraint. To take liberties with nature is to invite catastrophic situations.

Concentration of economic and political power either in an individual or in groups or the State will give rise to dictatorship. Hence he advocated political and economic decentralisation.

A person working in the midst of frighteningly gigantic machines is reduced to the position of an insignificant part of a machine. If we forget man and adopt materialist view-point when we compare human labour with the work of machinery, the machine assumes greater significance than the man working on it. Instead of the machine being an aid to the worker, it becomes its rival and depriver of his bread. Deendayalji was of the view that mechanisation should only be to the extent where man remains the master. Where machine dominates man, civilisation tends towards self-destruction.

Deendayalji gave serious thought to the economic problems of India and prescribed an economic order of small and medium scale industries based on the country’s agricultural base. It should be such as to give full gainful employment to the maximum number of people with the help of manual and machine labour. It was his firm view that to provide employment to every individual is the foundation of any social system. Therefore, in the equation of our economics, the limit of the use of machines and the working conditions must be decided, taking the magnitude of man-power equal to the total number of the working population, because the demand is always equal to the Purchasing Power of the people.

In India man-power is abundant. Therefore. until the demand, i.e., purchasing power, increases, employment of machinery will have to be restricted within limits. He was in favour of limiting large-scale industries to the production of such goods as could not be produced in small-scale units.

Deendayalji pointed out that in villages agricultural operations take place only during certain seasons. For the rest of the time the farmers and farm labour remain idle. But during the sowing and harvesting period there is a need for very large numbers of workers. If workers from villages are diverted in large numbers to industries established in far away towns and cities, food production will suffer due to want of a sufficient working force when it is needed. Thereto, proper arrangements should be made in villages themselves by setting up small scale industries to provide employment to village folk. A starving labourer or a healthy man eating without doing any work are both signs of distortion in the economic order.

The basic necessities of man which should be provided for at any cost, are food, shelter, clothing, education and health. Therefore, production of goods meant for these should be undertaken on a priority basis. Besides, care should also be taken to see that the industrial set-up is so arranged that if and when the need arises, there should be enough supply of materials and equipment for the defence of the country.

Deendayalji said that both modern democracy and socialism have their origin in class conflict. The objective of both is to end this class conflict and establish unity, but the shape of classes went on changing and there was no end to the conflict. The reason for this is the concept of the struggle for existence, as propounded by Charles Darwin, which is at the root of all western thought processes. This principle is one-sided. The integral philosophy of India has given primacy to harmony and not to discord. Creation is the outcome not of a conflict between Purusha and Prakriti, but of their cooperation. It is sustained by cooperation and not by conflict. Democracy and Socialism can rise above their conflicts and inner discords and merge into a harmonious existence if they accept this basis. But then, democratic debates will not mean mutual exclusion ; instead they will have to keep before them the object of the attainment of truth by mutual understanding and looking into all the aspects of reality and thereby pursue the path of the ultimate welfare of all. Likewise, socialism also will not remain centred round the State. The State is only an organ of the society. Men should be oriented towards serving the society. The aim should not be to make the State the master of either individuals or the society.

Democracy born out of class conflict, which was opposed to excesses, gave rise to the capitalist man who is overmoney-hungry, whereas Marxism, which was the product of hatred of exploitation, gave rise to blood-thirsty men. Only the Bharatiya philosophy of life, which embraces the concept of Dharma, Artha, Kama and Moksha can resolve their contradictions and therefore both democracy and socialism need to be Indianised. The Bharatiya view of life does not permit anyone to be kept idle without work. ‘Charaiveti, Charaiveti’, ‘Move on, move on’, is the music of our life. The Upanishads rejected the idea of over-accumulation. Vyasa has declared in clear terms that the right to property is limited to what is required to fill one’s belly, and those who consider more than that as their own are to be punished as thieves.

The test of economic development and planning will not be those who were placed on the highest rung of the society but those who are on the lowest rung. Today there are crores upon crores of people who are deprived of even basic human rights. The rules and regulations, plans and policies, sentiments and practices of the administration do not bestow any attention on this section of the population, but consider them many times a road-block to development. Our approach is that the down-trodden and the distressed, the illiterate and the ill-fed are our gods to worship. To worship them is our social and human duty. Only when we provide them with solid and beautiful dwelling places, make arrangements to give them two square meals, enlighten their children and women by giving them education and a philoso¬phy of life, make them stand on their own feet by providing them with avenues of employment then we can say that we consider them our own brothers. Time has been standing still in our villages. Parents have not been able to build up a future for their children. Until and unless we are able to establish a life of self-reliance and self-respect in such villages and create hope and confidence in the minds of these village-folk, we will not be able to rouse the vitality of the nation. The centre of our faith, the object of our adoration and worship, the medium of our valour and efforts, and the criterion of our achievement will be that man who is today mute, homeless and destitute. When we make him the embodiment of the four Purusharthas, and the master of material well-being, when we endow him with knowledge and enable him to realise his spiritual nature, and thus when we make him dedicated to the service of the world, for whom the world is his home, then and then alone would our philosophy of Integral Humanism be fulfilled.

In his short span of life Deendayalji bequeathed to us these invaluable treasures. Drawing inspiration from him, to build up a country-wide atmophsphere of dedicated life is the need of the hour.

(Based on radio talk by Shri Nanaji Deshmukh, the then General Secretary of Janata Party, on 25th September, 1977)