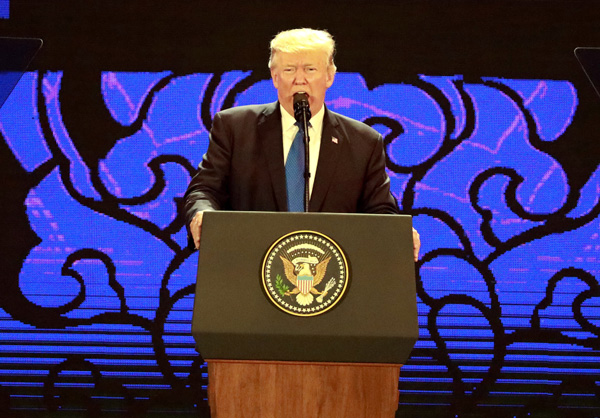 India and Prime Minister Shri Narendra Modi on 10 November, 2017 got an unexpected and huge thumb up from US President Donald Trump in his trademark style. On the other hand China, got a tongue lashing from the US President.

Trump commended India for being the world’s largest democracy and for achieving astounding growth. He praised PM Shri Modi for bringing the country’s people “together as one “. At the same time, in what was seen as sharp rebuke to China, Trump railed against trade practices he said have put Americans out of work and warned that the US would no longer “turn a blind eye” to trade abuses.

Trump made these comments at an address at the Asia-Pacific Economic Cooperation (APEC) summit of chief executives in Vietnam, where he arrived earlier from a trip in China. The US President’s laudatory comments about India and PM Modi come just months after a very successful maiden meeting between the two leaders in Washington in August.

“India is celebrating its 70th anniversary. It’s a sovereign democracy, as well as of over one billion people,” said the US President. “It’s the largest democracy in the world,” he added.

Long an admirer of India’s growth story, he said that growth has led to “a world of opportunity” for all Indians. “Since India opened its economy it has achieved astounding growth and a new world of opportunity for its expanding middle class, and PM Modi has been working to bring that vast country and all of its people together as one, and he’s working at it very, very successfully indeed,” said Trump.

The leaders of Japan, Russia, China and South Korea are also attending the APEC summit, in addition to the US.