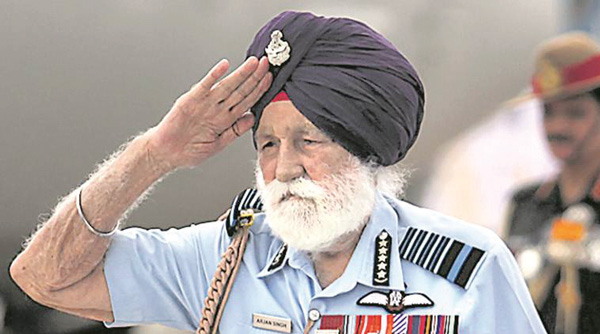 War hero Marshal Arjan Singh,who served as Chief of the Air Staff from 1964 to 1969 died on September 16. Marshal Arjan Singh who led the Indian Air Force during the 1965 India-Pakistan conflict which was won by Indian Air force. For his distinguished service in commanding the IAF during the Indo-Pakistani War of 1965, he was awarded the Padma Vibhushan and in 1966 became the first IAF officer to be promoted to air chief marshal. After retiring from the IAF, he served as a diplomat, politician and advisor to the Indian government. He was Lieutenant Governor of Delhi from 1989 to 1990. In 2002, he became the first and only officer of the Indian Air Force to be promoted to five-star rank as Marshal of the Indian Air Force, equal to the army rank of Field Marshal.

Prime Minister Shri Narendra Modi, on the demise of great war-warrior Marshal Arjan Singh, tweeted “India mourns the unfortunate demise of Marshal of the Indian Air Force Arjan Singh. We remember his outstanding service to the nation. Marshal of the IAF Arjan Singh’s determined focus on capacity building in the IAF added great strength to our defence capabilities. India will never forget the excellent leadership of Marshal of the IAF Arjan Singh in 1965, when the IAF saw substantial action.Sometime back I met him, who despite his ill health tried to get up to salute even though I said no. Such was his soldier discipline.”