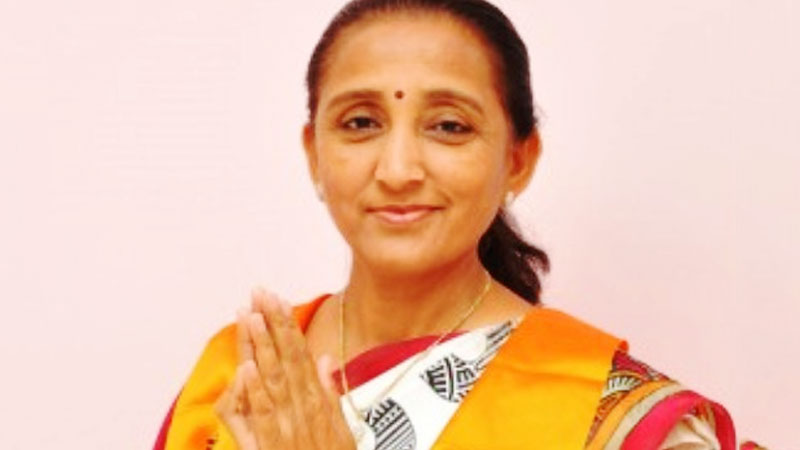 Dr. Bharatiben Shiyal, National Vice President of the Bharatiya Janata Party and Lok Sabha MP, spoke with Kamal Sandesh Associate Editor Sanjeev Kumar Sinha and Member of the Kamal Sandesh Digital team Vipul Sharma about the Modi government’s exceptional focus on women’s empowerment in the country. She also emphasized the party’s ongoing organizational approach to women and the Modi government’s various welfare schemes at the grass-root level for empowering women in various parts of the country. Excerpts from the discussion:

Please tell us something about your political journey in the BJP.

My political career began in the year 2000, when I contested and won the Zilla Panchayat elections by a wide margin. This was the era when the Congress party ruled the district panchayat. However, due to internal squabbles within the Congress, the BJP was given the opportunity to govern the district panchayat, and I was elected president of the district panchayat. Along with this, my close association with party-related activities was going smoothly, and I was elected as District Vice President three times. Aside from that, at the district level, I was in charge of various Morchas and cells. At the state level, I was a member of the OBC Morcha executive. Similarly, I was given the opportunity to serve on the State Executive. After that, I stood for the Talaja Assembly Constituency in Gujarat in 2012 and won by a huge margin.

In 2014, I was given the opportunity to run for Lok Sabha, and I became the first woman to be elected to the Bhavnagar Lok Sabha constituency. I had the largest margin of victory in Saurashtra when the election results were announced. Similarly, in the 2019 Lok Sabha elections, I was given the opportunity to contest from Bhavnagar again, and this time my margin of victory was even greater than the previous time. I am also the BJP’s National Vice President at present.

What mechanism does the BJP have in place to encourage women Karyakartas?

Look, ever since the BJP was founded, women have been given their due place within the party. Despite the fact that no special provisions or reservations have been announced, the party is ensuring that women have at least 33 percent representation in the party’s organisational structure. Women have equal participation in the party, from the national level to the booth level, in my experience. Looking at the current situation at the national level, the party has five female vice presidents. Aside from the general secretary, the party has four secretaries who are all women. At both the national and state levels, there is a Mahila Morcha. Women’s participation is ensured as a result of this.

What programmes are in place to train women in the party?

Our party is undergoing training programmes at all levels, from the national to the Mandal. When a woman is given a position of responsibility in an organisation or becomes a public representative, she is given training under the training varg. When I arrived at the Vidhan Sabha, a three-day training Varg was organised for us, during which we were taught how to work in the assembly and in the best interests of the common people. Aside from that, we were taught how to work with officials and how to coordinate with the government.

What steps has the Modi government taken to promote women’s empowerment?

The Modi government built toilets for women all over the country and gave them due respect. For women, the Ujjwala scheme was introduced. Similarly, the Sukanya Samriddhi Yojana and the Mudra Yojana have been launched, with women accounting for 76% of borrowers. The ‘Matritva Yojana’ deposits Rs 6000 into the accounts of women at the time of childbirth, so that the woman can care for herself and her child. Aside from that, maternity leave has been extended from 12 to 26 weeks.

Self-help groups are being strengthened in response to rural women’s apathy. Aside from that, the Modi government has abolished the heinous practise of triple talaq. Simultaneously, various women’s laws have been reformed. It is due to the Modi government’s efforts that the positive outcome of the Beti Bachao-Beti Padhao campaign, which began in Haryana, is now visible throughout the country.

The Modi government built toilets for women all over the country and gave them due respect. For women, the Ujjwala scheme was introduced. Similarly, the Sukanya Samriddhi Yojana and the Mudra Yojana have been launched, with women accounting for 76% of borrowers.

Do you think that women’s political participation should be increased further?

Look, women make up half of the world’s population. As a result, equal participation of women in politics is natural, just as it is in any other field. In recent times, there has been some improvement in this situation in India, and as can be seen, the Bharatiya Janata Party is doing excellent work in this regard. Along with ensuring women’s participation in the organisation, the BJP has also ensured women’s representation in government. The Modi government now has 11 female ministers. Similarly, the Speaker of the Lok Sabha in the previous government was Smt. Sumitra Mahajan, and the popular External Affairs Minister was Late Sushma Swaraj.

What is the place of women in Indian culture?

Women have always been worshipped in Indian culture and given the status of goddesses in the Vedas, Upanishads, and Shastras. As a result, it is commonly said, ‘Yatra naryastu pujyante ramante tatra devata’ or ‘Nari tu Narayani’. Yes, I agree that there was a time when there was a shift in this perception and the exploitation of women began, and women were denied equal participation. However, there has been a shift in women’s perceptions since the Modi government took office. Their security, self-employment, and self-esteem are all guaranteed. Women now drive everything from rickshaws to fighter planes. In sports, women have upheld the country’s name.

When Shri Narendra Modi was Chief Minister of Gujarat, he initiated a number of schemes aimed at empowering women. It received a lot of positive feedback from people all over the country. Please let us know some of such initiatives.

When Modiji was Gujarat’s Chief Minister, he was most concerned with women. When he was Chief Minister, he was given various gifts whenever he went on foreign tours. However, they were traditionally deposited in Toshakhana, but Hon’ble Modiji came up with a proposal in this context, and on his behest, the auction process of these gifts was started, and the proceeds from these auctions were deposited in the ‘Kanya Kelavani Nidhi’ fund, which was created for women.Through which various programs were made for the girl’s empowerment. Efforts were made to raise awareness through the ‘Kanya Kelavani Rath’ in areas where female illiteracy and dropout rates were high. Aside from that, free ST passes, free bicycles, uniforms, books, and various scholarship programmes for young girls were also launched. Vidyalakshmi Bond was also brought by the Gujarat government. Many women work in the animal husbandry industry in Gujarat’s rural areas, and every village has a milk producing groups. Special provisions have been made for milk producer groups with only female members. Stamp duty was waived for women who purchased property. Women have a 33 percent reservation in government recruitment.