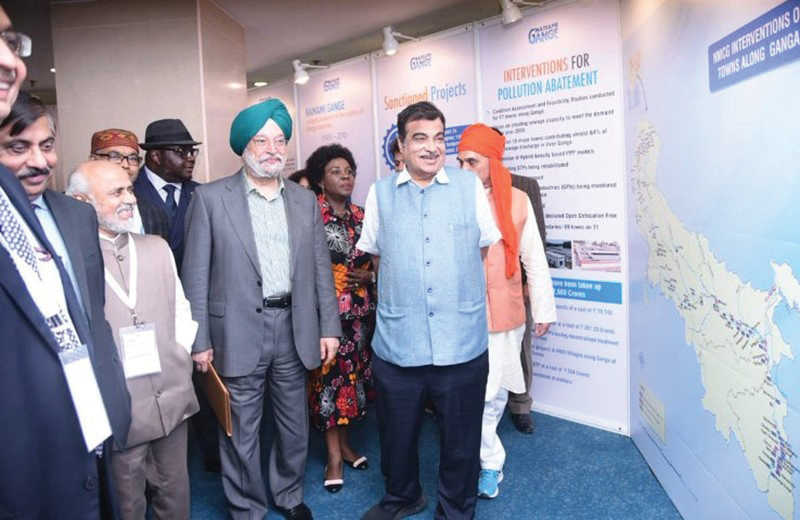 Significant changes to be visible on ground after March 2019

Union Minister for Water Resources, River Development and Ganga Rejuvenation Shri Nitin Gadkari expressed his satisfaction over the positive feedback being received for Clean Ganga Mission and assured the people of the country that their dream of rejuvenated Ganga will soon be fulfilled. He said that with the support of all stakeholders, the work on Clean Ganga Mission is going on war footing and the hard work of all stakeholders has started to show visible results on ground. “The government has freed Kanpur from the ill effects of Sisamau drain after 128 years, which was infamous for the pollution it was causing to River Ganga,” Gadkari said, adding, “140 MLD of waste water has been stopped from flowing into River Ganga.” Shri Gadkari was speaking at the three-day long India Water Impact Summit 2018 (5th to 7th December 2018) being organized at Vigyan Bhawan, New Delhi.

Shri Gadkari said that since inception of Ganga cleaning programme (1985) till 2014, central government had spent less than Rs. 4000 crore. With the launch of Namami Gange programme, provision of Rs. 20,000 crore have been made for 5 years. So far, National Mission for Clean Ganga (NMCG) has sanctioned 254 projects for more than Rs 24,000 crore and has spent about Rs. 5,000 crore in the last 4 years. He said that not only has the pace of expenditure increased manifold, results are visible on the ground as well. “Out of these 254 projects, 133 are for sewerage management, 11 bioremediation, one modular STP, 1 rural sanitation, 64 ghat and crematoria, 6 bio-diversity and 16 afforestation projects,” Shri Gadkari informed the gathering. He added that 133 sewerage infrastructure projects costing Rs. 19,789 crore will create 3969 MLD of sewage treatment capacity and lay down 4871 kilometer of sewerage network.