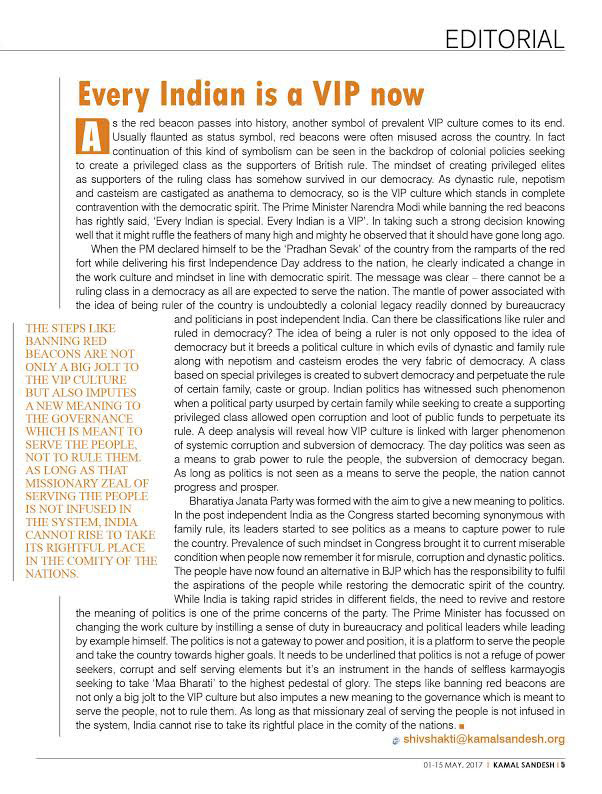 As the red beacon passes into history, another symbol of prevalent VIP culture comes to its end. Usually flaunted as status symbol, red beacons were often misused across the country. In fact continuation of this kind of symbolism can be seen in the backdrop of colonial policies seeking to create a privileged class as the supporters of British rule. The mindset of creating privileged elites as supporters of the ruling class has somehow survived in our democracy. As dynastic rule, nepotism and casteism are castigated as anathema to democracy, so is the VIP culture which stands in complete contravention with the democratic spirit. The Prime Minister Narendra Modi while banning the red beacons has rightly said, ‘Every Indian is special. Every Indian is a VIP’. In taking such a strong decision knowing well that it might ruffle the feathers of many high and mighty he observed that it should have gone long ago.

When the PM declared himself to be the ‘Pradhan Sevak’ of the country from the ramparts of the red fort while delivering his first Independence Day address to the nation, he clearly indicated a change in the work culture and mindset in line with democratic spirit. The message was clear – there cannot be a ruling class in a democracy as all are expected to serve the nation. The mantle of power associated with the idea of being ruler of the country is undoubtedly a colonial legacy readily donned by bureaucracy and politicians in post independent India. Can there be classifications like ruler and ruled in democracy? The idea of being a ruler is not only opposed to the idea of democracy but it breeds a political culture in which evils of dynastic and family rule along with nepotism and casteism erodes the very fabric of democracy. A class based on special privileges is created to subvert democracy and perpetuate the rule of certain family, caste or group. Indian politics has witnessed such phenomenon when a political party usurped by certain family while seeking to create a supporting privileged class allowed open corruption and loot of public funds to perpetuate its rule. A deep analysis will reveal how VIP culture is linked with larger phenomenon of systemic corruption and subversion of democracy. The day politics was seen as a means to grab power to rule the people, the subversion of democracy began. As long as politics is not seen as a means to serve the people, the nation cannot progress and prosper.

Bharatiya Janata Party was formed with the aim to give a new meaning to politics. In the post independent India as the Congress started becoming synonymous with family rule, its leaders started to see politics as a means to capture power to rule the country. Prevalence of such mindset in Congress brought it to current miserable condition when people now remember it for misrule, corruption and dynastic politics. The people have now found an alternative in BJP which has the responsibility to fulfil the aspirations of the people while restoring the democratic spirit of the country. While India is taking rapid strides in different fields, the need to revive and restore the meaning of politics is one of the prime concerns of the party. The Prime Minister has focussed on changing the work culture by instilling a sense of duty in bureaucracy and political leaders while leading by example himself. The politics is not a gateway to power and position, it is a platform to serve the people and take the country towards higher goals. It needs to be underlined that politics is not a refuge of power seekers, corrupt and self serving elements but it’s an instrument in the hands of selfless karmayogis seeking to take ‘Maa Bharati’ to the highest pedestal of glory. The steps like banning red beacons are not only a big jolt to the VIP culture but also imputes a new meaning to the governance which is meant to serve the people, not to rule them. As long as that missionary zeal of serving the people is not infused in the system, India cannot rise to take its rightful place in the comity of the nations.
shivshakti@kamalsandesh.org