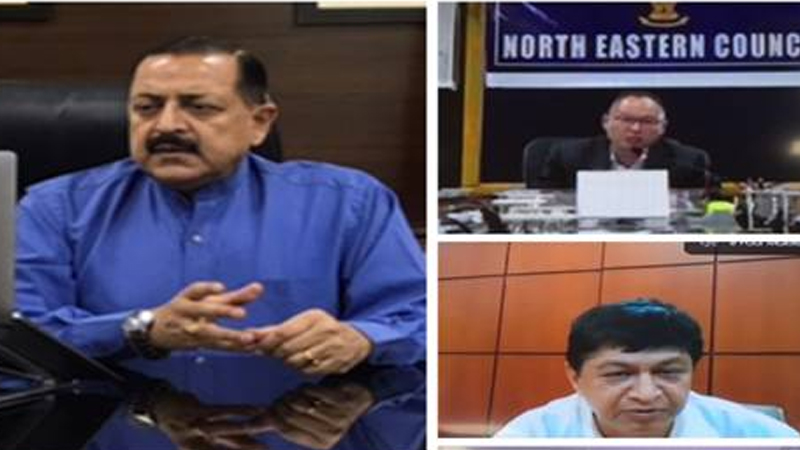 Union Minister of State (Independent Charge) Development of North Eastern Region (DoNER), MoS PMO, Personnel, Public Grievances, Pensions, Atomic Energy and Space, Dr Jitendra Singh today said that Ministry of DoNER is taking proactive steps in supplementing and augmenting the COVID related infrastructure including Oxygen Plants in all the North-Eastern States. In a review meeting held today, it was informed that an oxygen plant was set up in Tawang in Arunachal Pradesh with financial support provided by the Ministry and efforts are on to set up many more plants in remote and far-flung areas of other States. The Ministry is also actively considering the proposal of Arunachal Government for five mobile oxygen vans at a cost of 5 crore rupees.

Dr Jitendra Singh expressed satisfaction that the united fund of Rs.25 crores given to North Eastern States last March for gap funding to fight the COVID-19 outbreak effectively has proved a boon for many states for purchase of vital health equipment in many hospitals. He however added that there is no shortage of oxygen in any of the North Eastern States and some of them are having surplus stock due to timely supply last year.

In addition, the DoNER Minister also recalled that last year in the early days of lockdown-1, the Ministry of Development of North Eastern Region (DoNER) has stepped in pre-emptively and placed an amount of Rs.25 Cr at the disposal of North Eastern States for preparatory steps to tackle the pandemic, even though at that time the North Eastern States had not been that much affected so far and many of the States like Sikkim and Manipur were absolutely Corona-free at that time. He said, the Ministry of Development of North Eastern Region (DoNER), besides undertaking infrastructural works are concerned, also comes to the aid of North Eastern States in the event of any natural or unnatural calamity. He cited the example of the earthquake that struck Assam and Arunachal Pradesh last year and the DoNER Ministry immediately took up the responsibility of coordinating between the respective State governments and the Centre, despite the fact that many of the Ministry officials were down with COVID and he was himself also hospitalised for the same.

The Minister also expressed happiness on being informed that for the second consecutive year, 100 percent budget of the Ministry of DoNER has been spent for the current financial year well in advance before the end of the fiscal.

Dr Jitendra Singh also recalled that soon after the declaration of the Lockdown in March 2020, decision was taken on the intervention of Prime Minister Sh Narendra Modi that Air Cargo flights carrying essential supplies will be operated on priority in the North Eastern Region as well as other distant regions including the Union Territories of Jammu & Kashmir and Ladakh, and the Island territories. The Minister added that this time also all measures are being taken to help the North-Eastern States on priority basis.

Dr Jitendra Singh said that he is in regular touch with all the North Eastern States for any exigency and informed that the Ministry undertook coordination activities on a large scale during the recent earthquake in Assam.