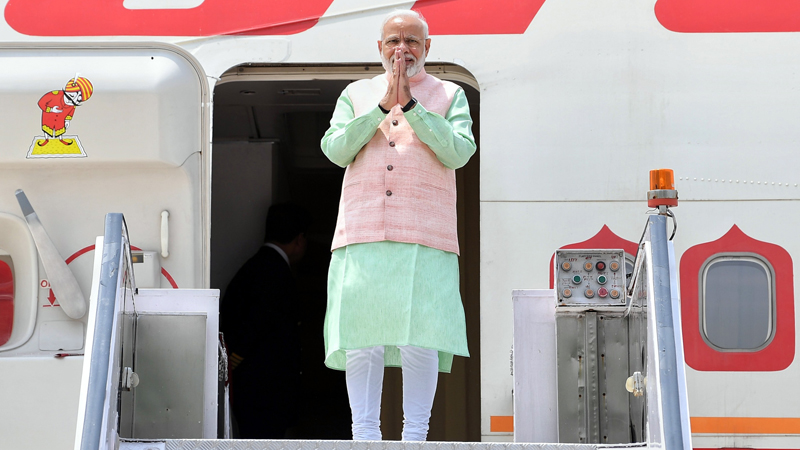 Shri Modi will address an event of the Indian Community at the UNESCO headquarters in Paris and inaugurate a memorial for Indian victims of two tragic air crashes of Air India flights in 1950 and 1966.

Prime Minister Shri Narendra Modi has said his visits to France, United Arab Emirates and Bahrain will strengthen India’s relations with time-tested friends and help explore new areas of cooperation. In a statement ahead of his visit, Shri Modi said in France, he is looking forward to holding talks with President Emmanuel Macron and Prime Minister Philippe. He added that he would also interact with the Indian community and dedicate a memorial to the Indian victims of the two Air India crashes in France in the 1950s and 1960s.

The Prime Minister said that in UAE, there would be comprehensive talks with His Highness the Crown Prince of Abu Dhabi, Sheikh Mohammed bin Zayed Al Nahyan. He said, he is looking forward to jointly release the stamp to commemorate the 150th Birth Anniversary of Mahatma Gandhi along with His Highness the Crown Prince. He said it will be an honour to receive the Order of Zayed, the highest civilian decoration being conferred by the UAE Government, during this visit.

Shri Modi said his visit to Bahrain would be the first ever Prime Ministerial visit to the Kingdom. He said, he is looking forward to meeting Prime Minister His Royal Highness Prince Shaikh Khalifa bin Salman Al Khalifa and His Majesty the King of Bahrain Shaikh Hamad bin Isa Al Khalifa.