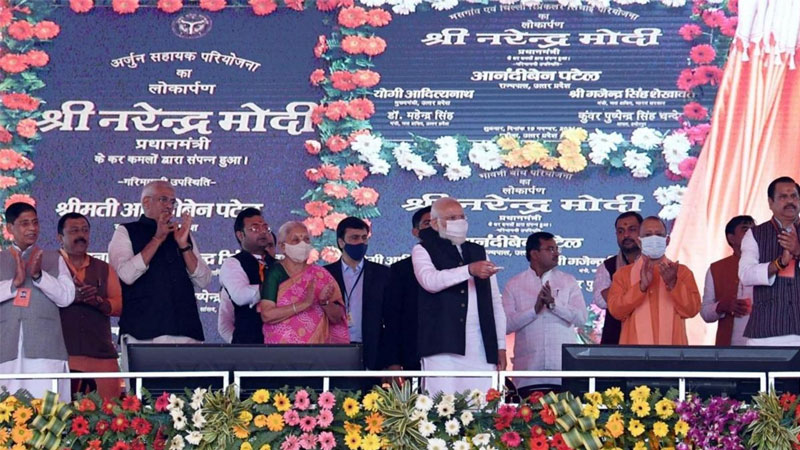 Prime Minister Shri Narendra Modi on 19 November, 2021 inaugurated and laid foundation stone of projects worth thousands of corers in Mahoba and Jhansi districts of Bundelkhand in Uttar Pradesh. Targeting previous opposition governments, both at the Centre and the state, the Prime Minister said that the “pariwarwadi” kept farmers in deprivation, whereas the BJP led NDA government worked for their benefit. Shri Modi said, “The opposition never got tired of looting Uttar Pradesh, while we never get tired of working.”

Speaking about the efforts of the present government to work for the betterment of farmers, Shri Modi said, “Some political parties engage farmers in problems… They do politics of problems but we do national politics of finding solutions.”

Invoking the kings of the Bundel, Parihar and Chandel dynasties for setting examples in water conservation, the Prime Minister said that those who ruled in Delhi as well as Uttar Pradesh for a long time uprooted this region one after another.
Alleging that previous governments gave away the region’s forests and resources to mafias, PM Shri Modi said, “Now that a bulldozer is running in UP, some people are raising a hue and cry.” Promising that projects like the Bundelkhand Expressway and the UP Defence Corridor would make the region self-reliant in terms of employment and prevent migration from Bundelkhand. The Prime Minister promised to promote the region under the double engine government at the Centre and the state.

The Prime Minister also laid the foundation stone of the 600 MW Ultramega Solar Power Park at Garautha in Jhansi. It is being constructed at a cost of over Rs 3000 crore, and will help provide the dual benefits of cheaper electricity and grid stability. The Prime Minister also inaugurated ‘Atal Ekta Park’ in Jhansi. Named after Former Prime Minister Shri Atal Bihari Vajpayee, the park has been built at a cost of over Rs 11 crore, and is spread across an area of about 40,000 square metre. It will also house a library, as well as a statue of Shri Atal Bihari Vajpayee. The statue has been built by the renowned sculptor Shri Ram Sutar, the man behind the Statue of Unity.
Addressing the gathering, the Prime Minister noted the birth anniversary of Rani Laxmibai, the pinnacle of valor and might and said today this land of Jhansi is witnessing the grand Amrit Mahotsav of freedom! And today a new strong and powerful India is taking shape on this land. Prime Minister said he feels pride in representing the birthplace of Rani Laxmibai i.e. Kashi. The Prime Minister also extended warm wishes for the Prakash Purab of Guru Nanak Dev Ji, Kartik Purnima and Dev-Deepawali. The Prime Minister paid tribute to many heroes and heroins for their contribution to the history of valor and sacrifice.

• People witnessed how the government has come out of the closed rooms of Delhi to every nook and corner of the country.
• Keeping the farmers embroiled in problems has always been the basis of some political parties. They do politics of problems and we follow the national policy of solutions.
• For the first time, the people of Bundelkhand are seeing the government working for its development.
• The previous governments did not get tired of looting Uttar Pradesh, we do not get tired of working.
• Dynastic governments kept the farmers only in deprivation. They used to make announcements in the name of farmers, but even a single pie did not reach the farmer.
• Double Engine government of the Karam Yogis is working tirelessly for the progress of Bundelkhand.